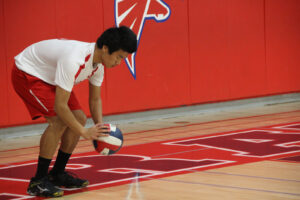 Senior Chester Leung prepares to serve during a recent game.

Outside hitter junior Joel Schneidmiller rushed to the net and slammed the ball heavily as it landed on the floor, causing a loud thud to echo throughout the gym. The buzzer rang and the Falcons rejoiced as they defeated rival Lynbrook 3-1 in an away game on April 20.

As of April 22, The Falcons are 13-4 in the more competitive De Anza League. Despite having just recently moved up a league, the Falcons have proven themselves to be fit for the fierce competition.

A good example of their competitive spirit occurred on April 15, when the boys were able to defeat Los Gatos 3-1. Just two days previously, the boys faced the Wildcats in a home game for the first time and lost 3-2. Their determination to prove themselves against their biggest rival contributed to their revenge win.

“Last year, we did pretty well compared to the rest of the league,” senior setter Chester Leung said. “But this year, all the games were more competitive than we’re used to due to us moving up a league.”

Although the current record is strong, the team has not been totally satisfied by its performance.

“We’re playing better as a team and we bring more intensity to the courts,” Leung said. “But I think we still need more energy to push through the game.”

On April 1, the boys redeemed themselves with a 3-1 victory against Cupertino after the Falcons suffered their third loss of the season, this one against the Monta Vista Matadors, ranked seventh in the nation, by a set score 3-0 on March 30.

“We tried our best [to beat the Matadors], but we couldn’t handle the huge blockers,” said senior outside hitter Spencer Yen. “They just shut down our hitting.”

In their game against Cupertino, key players Schneidmiller and Alex Li contributed to each individual set. “We did well on defense with digging and blocking,” Yen said. “Joel helped us regain momentum after slipping up on the second set, and we ended with a great game.”

The boys won the Leland Charger Classic tournament on March 12 with consecutive wins against King’s Academy, Leland, Archbishop Mitty and Leigh, all with scores of 2-0.

“We want to win more [games] and that shows on the court because we’re making greater efforts to win rallies,” Leung said. “Those one or two points per set really swing the game because the games are so close.”

The boys’ last game of the season is Wednesday at Mountain View. CCS begins on May 10 and they are competing in Division 2, the same division as last year. The boys are aiming to win the CCS title for the second year in a row, and with their current record against top competition, they see their goal as being within their reach.