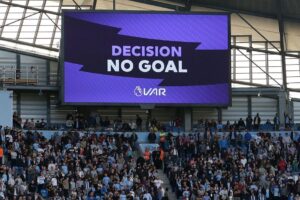 After numerous checks, a goal is disallowed by VAR to fans’ dismay.

As Tottenham Hotspur’s Heung-min Son celebrated after extending their lead to 2-0 against Leicester City on Sept. 21, 2019, his excitement was cut short — the goal had been disallowed since his toes were offside by mere inches, according to video reviews. Eventually, Tottenham lost 2-1 in this infamous and controversial match, much to the chagrin of fans.

In November 2018, the English Premier League introduced the Video Assistant Referee (VAR) — a new, advanced system of refereeing, agreed on by all 20 clubs in the league. According to Premier League officials, this technology would be utilized for “clear and obvious errors” for on-field referees, which was revolutionary in the history of the world’s most popular soccer league.

Although VAR was adopted in hopes of speeding up games while making quick decisions, it is now doing the opposite. The system frequently makes mistakes, including red card decisions or controversial disallowed goals, and fans have slated the system for ruining “the beautiful game,” a nickname coined by the media and fans alike.

What infuriates viewers the most is the indecisiveness of VAR. Even with plenty of technology and refereeing staff, VAR cannot make simple decisions in a timely manner, with the infamous “VAR Check” screen loading for minutes at a time. The time wasted is then added on during stoppage time, unnecessarily prolonging games.

As a result, the fluidity of soccer has declined. With each half, fans previously had the privilege of witnessing 45 minutes of free-flowing, uninterrupted soccer, but the intervention of VAR now causes awkward, undesirable breaks in play. Often, whole stadiums erupt into confusion, as VAR can spend minutes analyzing the most minor possible infractions.

Still, VAR’s most blatant flaws lie in reviewing goals. In the past, a game-winning goal or a late equalizer sparked excitement for both players and fans. Since the introduction of VAR, however, it’s near impossible to celebrate a goal, since everything is now subject to VAR review.

This sort of refereeing isn’t natural in sports. When VAR  decisions punish teams for the most minor infractions, players’ mentality and momentum is weakened, leading to a less entertaining and less competitive league for all.

Additionally, VAR plays an disproportionally large role in determining the outcome of a match or even a whole season. Fans created a hypothetical table in which points were added or deducted based on whether VAR’s controversial decision benefitted or cost them and found that 16 points separated the top team from the bottom team — the difference between securing a top-four finish and scraping the upper half of the table.

Another hot topic of debate has been the handball rule. In the past, players have been penalized for having their arms in “unnatural positions,” whether that meant raising their arms in the air or deliberately positioning them to block a shot on goal.

Now, a slight deflection off of a player’s arm is considered a handball by VAR, according to the Premier League’s new handball rule. For players, this is incredibly inconvenient; jumping for a header is practically impossible without arm movements, and players often use their hands to gesture and communicate in games.

In the final seconds of a match between Tottenham Hotspur and Newcastle on Sept. 27, Newcastle’s Andy Caroll headed the ball straight into Tottenham’s Eric Dier’s arm from just one foot away. Yet, although Dier was looking away from the ball, a penalty was awarded to Newcastle by VAR, resulting in a disappointing 1-1 draw.

After only two years in practice, VAR has failed time and time again — but that’s not to say that VAR is a complete disgrace. The fundamental ideas, like objectivity and efficiency, surrounding VAR’s use are correct, but the way it’s being implemented needs a drastic change, whether that means a totally revamped system or completely scrapping the whole idea of video reviews until the technology improves.

Before the introduction of VAR, soccer as a whole was much simpler — mistakes from referees were parts of the game itself. Reviewing decisions by such unrealistic margins has taken away the natural, free-flowing refereeing of soccer.

The clock is ticking for the Premier League to act, and there is immense pressure from fans, players and media from all over the world to salvage the beautiful game from the grips of this nightmarish technology.