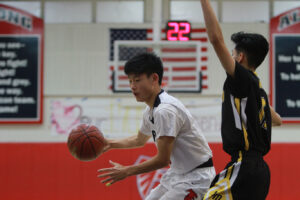 With five minutes left in the third quarter against rival Los Gatos last Friday at home, the Falcons led 44-38 following a crossover 3-pointer from junior point guard Tyler Chu. The crowd roared, but the lead didn’t last. The Falcons fell 63-58.

The leading scorers were Chu with 19 points and senior forward Leo Cao and junior guard Cameron King each with 14 points, but they lost primarily because they were outrebounded on both ends of the court, giving up 22 second-chance points.

Falcon coach Patrick Judge is trying to find a winning formula as the preseason progresses in December.

“It’s obvious the biggest thing missing is chemistry,” sophomore center Guilio Morini Bianzino said. “We’ve never played together before, and that’s something we’ll have to work on throughout the season.”

With only six players having prior varsity experience, the vast majority of the team is facing tougher competition than they have in the past. Despite the improved competition, junior guard Isaac Sun — in his first year on varsity — says the adjustment has been manageable.

“Everyone’s taller and stronger than on JV, but our team practices so much that it doesn’t matter,” Sun said. “The competition’s not bad. As long as we play within our coach’s system we’ll always win.”

Junior guard Cameron King noted that despite the lack of experience and the loss of seniors, the team will be successful due to their players’ skills and work ethic. King believes that their dedication and frequent practices have accelerated their team chemistry.

“It’s definitely been a grind,” King said. “Practices have been around three hours every day and it’s been tiring, but we’ve definitely gotten a lot better.”

Bianzino also believes the team’s success will come down to their mentality.

“We had a practice recently, and we had a talk about how we wanted to play more fun instead of trying to win,” Bianzino said. “We want to get our spark back and just have fun with it.”

With the team’s tallest player being Bianzino at 6’4,’’ the team is undersized compared to most of the competition. Against bigger teams, the Falcons compensate for their lack of height and size by playing fast and scoring in transition.

“We play to our strengths, which are speed and shooting,” Bianzino said. “Instead of posting up, we’ll play a lot of fast breaks.”

Though the team always aims to compete, Bianzino believes the year is a rebuilding effort. Given that the team has seven juniors and four underclassmen, Bianzino is confident the Falcons will begin winning again soon.

“It’s definitely a rebuilding year, but we’re still going to go for CCS,” Bianzino said. “Why not both rebuild and compete at the same time?”