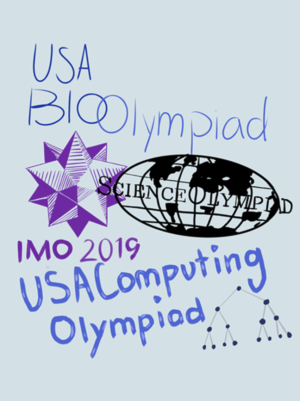 Due to the outbreak, the majority have been canceled to help prevent the spreading of the virus.

For weeks in advance of the March 28 Junior Science Olympiad, club president Isaac Sun worked on his scientific procedure-writing skills in preparation for the “Write It Do It” event in the Santa Clara Regional.

But like so many others, the competition was canceled due to concerns over the COVID-19 outbreak, leaving Sun sorely disappointed.

“COVID-19 has decimated an entire year's worth of work, and I was devastated to hear that we would not be able to compete this year, especially in a year that we were expected to do well,” Sun said.

Freshman Nilay Mishra, who had qualified for the  USAMO, a competition for students who passed AIME and AMC 12, said, “I'm sure that everyone who qualified to that level of competition has put in countless hours of effort. We all feel slightly disgruntled.”

Even so, Mishra does not feel that his preparation for the competition went to waste this year.

“Learning and enjoying math is something that is my passion, regardless of whether a tournament occurs or doesn't, or whether or not I meet my expectations,” Mishra said. “The single most important thing to me before a competition is knowing that I have put in the required effort and preparation, and things out of my control, while still a bummer, do not make my time spent cultivating my passion a waste.”

By contrast, the USA Computing Olympiad proceeded as usual for its annual online competitions in February and March despite the postponement of the in-person International Olympiad in Informatics. The top performers in USACO throughout the year were chosen as finalists, who then have to perform well enough in the summer training camp in order to be one of the US’s four representatives in IOI.

The US National Chemistry Olympiad decided to hold digital exams. Individual regional coordinators were responsible for nominating 15 students to take the digital national exam, which took place on April 26. Due to difficulties proctoring and administering a local exam, the Silicon Valley section, consisting of 34 schools, asked teachers to nominate students without taking the exam, instead relying on prior knowledge of students’ abilities. One student was taken from each of the 15 schools that historically performed the best on the olympiad.

History Bowl Nationals, though canceled for April, have been rescheduled for December. Quiz Bowl has been holding tournaments on Discord, an online chat service, although the in-person national tournaments have been canceled.

Competitions have also utilized online software such as Zoom. Juniors have participated in the National History Day competition online, using Zoom to explain their projects to the judges.

Junior Anthony Qin participated in the National History Day competition and qualified for the state competition in a group with juniors Rohan Kumar and Aaron Wong through their performance project titled “How Jazz Broke Down Racial Barriers.”

In order to allow participants to modify their performance without having to meet in person to record themselves, judges will be grading performances purely off of their scripts and research. For some, the change presents an opportunity to develop their script, but for others takes away the opportunity for creativity with visuals and sounds.

“I don’t mind states being changed, but I hope nationals is live if we make it past states,” Qin said. "Live music is a big part of our performance and it adds a lot to the quality and message of our presentation. I don’t think our performance project is being judged at its best if they are simply judging us off our script.”

However, not all competitions are well suited to being hosted online. Mishra feels that it is impractical for the IMO to be held over Zoom, as entire countries’ reputations are at stake if students cheat.

Students have been forced to adapt to the new changes in science competitions, which were made to prioritize the safety of the competitors.

“I think that if there was a competition we would really be running the risk of spreading COVID-19 which, especially since we are participating in a science competition, we should be aware of,” Sun said.