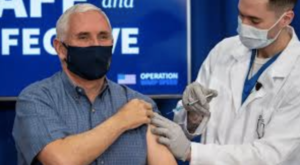 On Christmas Eve, I sat quarantined in my room, watching a rerun news broadcast of Mike Pence receiving the COVID-19 vaccine six days prior on Dec. 18.

Although Pence’s vaccination was part of a national plan to bolster public confidence in receiving the vaccine, as I watched the broadcast, I found myself getting angry at the fact that he — someone who had played an integral role in denying the severity of the COVID-19 disease — was getting access to the vaccine before the majority of essential workers across the nation were able to.

Three days earlier, my mother, who is an essential worker, found out that one of her co-worker’s sons had contracted COVID-19.

My mother works as a full-time caregiver to neurodivergent adults. Although the care center she works for closed in late March due to COVID-19 restriction laws, her work has still remained largely in-person, with her clients now relying on her for in-house assistance.

Every other weekday, she wakes up at 8 a.m. and drives to her client’s house to take care of her. On her off-days, her co-worker takes over the job.

This all changed after her co-worker's son tested positive.

After finding out that the co-worker was at-risk from her son, all of the client’s family members moved out of the house as a safety precaution, leaving the client, who now also had a high possibility of COVID-19 contraction, alone in the home.

This change caused the client to go from needing only 8 daily hours of caretaking to needing 24 hours each day. Additionally, my mom was informed that even if someone in her three-person work bubble (her co-worker or her client) were to contract the disease, she still would have had to keep on working in-person with the disease-carrying coworker or client because it wouldn’t be safe for anyone else to enter the bubble and take care of the client.

As soon as my mom found out about her work arrangement, my family began self-quarantining for a week. Although her situation was nowhere as dire as that of actual frontline healthcare workers, my mom told us all to get used to on and off self-quarantining, because she, as a caretaker, would only be able to receive the vaccine after 550,000 other workers in Santa Clara County.

The fact that a politician like Pence was able to receive the vaccine months before people like my mother, an essential worker, reveals the classism embedded in our nation: while rich and influential politicians are able to act recklessly in the pandemic with the knowledge that they’ll always have a healthcare safety net, essential workers are being left behind.

Another example of this phenomenon is Speaker of the House Nancy Pelosi. On the same day as Pence’s vaccination, Pelosi also received the COVID-19 vaccine.

Although on the opposite end of the political spectrum, Pelosi, like Pence, was accused of hypocrisy after one high-profile incident .

In early September, while many non-essential Californian businesses were forced to shut down and all citizens were being told to shelter in place, a maskless Pelosi was photographed leisurely getting her hair done at an illegally-open salon.

When confronted by the media, Pelosi avoided taking responsibility for actions, calling the entire situation a “set-up” and denying her knowledge of San Francisco’s shutdown — despite the fact that the county’s lockdown guidelines were all a mere Google search away.

The fact that these two were chosen to be some of the first people in the nation to receive the vaccine is frustrating, but no longer surprising. A foreshadowing of this phenomenon was President Donald Trump’s COVID-19 treatment.

Despite months of denying the existence of the COVID-19 disease and underplaying its effects, as soon as Trump contracted the disease, he was immediately treated with monoclonal antibodies, an effective yet largely inaccessible antibody treatment that had only been available for Trump and his inner circle.

Due to the efficacy of the treatment, Trump sustained a relatively speedy recovery (long-term effects aside) —  and promptly used his recovery as another way to downplay the effects of the virus.

Instances like these in the pandemic have made it clearer than ever that socio-political visibility and prestige has become an all-powerful trump card.

Six days after Christmas, my mother’s coworker was finally able to get tested for COVID-19 and ended up testing negative, ensuring that she had not been infected by her son and putting my mother, her client and the client’s family at ease. But not every essential worker’s story has a happy ending like hers.

In order to truly care for the vulnerable frontline workers who have been cleaning up the national government’s failure to combat the pandemic early-on, the nation needs to start holding politicians accountable for their actions.

Despite this, the importance of using well-known political figures to boost the public’s confidence in the vaccine cannot be overlooked.

The Republican party’s staunch deny-and-downplay approach to the virus makes it hard for the national government to maintain its integrity in selecting vaccination candidates, which is highly problematic because, as of right now, the far-right is one of the most prominent groups that need convincing of the vaccine’s legitimacy.

To combat this, the government should look to non-political figureheads who are universally loved by people on both sides of the political spectrum. Celebrities like Taylor Swift and Oprah Winfrey and sports stars like Lebron James and Michael Jordan may be a good start.