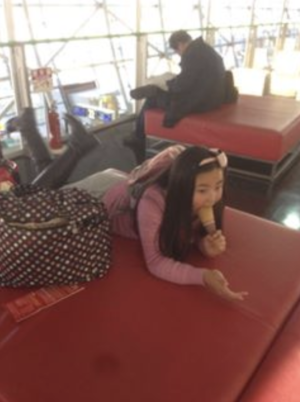 Sophomore Katherine Chen posted this picture of her younger self as part of the ‘Until Tomorrow’ Instagram challenge.

Though the viral Instagram challenge is entertaining, it can lead to unexpected conflict

From ice water dumps to ingesting tide pods, Instagram is no stranger to sudden viral trends. One trend that has recently made its debut on the Instagram stage is the “Until Tomorrow” challenge.

The “Until Tomorrow” challenge took the internet by storm in mid-March. Users were challenged to post embarrassing pictures of themselves to their Instagram accounts, with the caption stating “until tomorrow.” Once a user made a post, they had to message everyone who liked or commented on their post and challenge them to do the same, copying and pasting a pre-written message that urges users to “pass it on and don’t ruin the fun.”

The challenge spread across countries, with many, including Italy, creating their own versions of the challenge.

In addition to its widespread influence, the challenge has produced a wide variety of embarrassing content, from peculiarly angled selfies, to baby photos, to secondhand-embarrassment-inducing dance videos.

Despite having to expose themselves in non-ideal circumstances, many Instagram users didn’t think twice before jumping on the challenge.

Sophomore Katherine Chen decided to post for the “Until Tomorrow” challenge because she thought it would be an interesting way to connect with others. She was challenged by someone whose post she had liked.

Chen said she didn’t hesitate about posting the embarrassing picture – one of her younger self eating an ice cream cone – since she ”wasn’t the only one posting.”

“It is just a time where people can learn a little more about each other, [which is] actually pretty fun because you are able to see others post a few embarrassing pics,” Chen said.

However, some users who hopped on the challenge ended up gaining a little more than just fun.

When sophomore Lily Faye decided to join the trend after being tagged in a post by one of her friends, she too was only looking to bring entertainment into her life during the period of quarantine.

“I hopped on the ‘Until Tomorrow’ trend for the same reason a lot of people did; I was bored,” Faye said. “Being in quarantine, anything that seems the slightest bit entertaining is fun.”

As part of the challenge, Faye posted a few funny photos of her playing around as a kid and a short video of herself crying.

However, her posts brought her more than she had bargained for.

“After I posted, everything seemed fine until the next day,” Faye said. “My mom [told me that] someone had reported my post to my counselor and that people were concerned about the content I was posting,” Faye said.

It turned out that someone had reported the video of her crying to her guidance counselor, which ultimately resulted in the counselor contacting her mom. Despite the false alarm, Faye said she appreciated her counselor’s concern.

Although she still has “no clue” how her counselor found out or who reported her, Faye doesn’t regret partaking in the challenge.

“It was annoying to see that someone couldn’t see it as the joke it was, but these challenges are fun, [especially] when everyone partakes in one thing together,” Faye said.