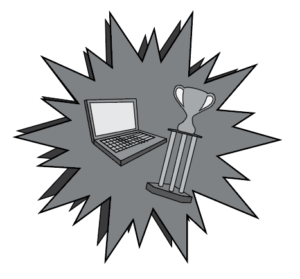 Graphic of a TOC trophy and a laptop for virtual competition.

At 5 a.m. on Saturdays, sophomore Arnav Garg is wide awake and hunched over a computer screen, furiously scribbling notes and rebuttal points onto a large legal pad as he competes in online speech and debate competitions on the East Coast.

Garg is a standout Lincoln Douglas debater and his dedication has already paid off early in his high school career.

He has made it to elimination rounds in the past few tournaments he attended. Most recently, Garg made it to the double octofinals round of the highly competitive Yale University Invitational and the octofinal round of the Apple Valley debate tournament, securing a gold Lincoln Douglas Tournament of Champions bid — a feat uncommon for underclassmen to achieve.

The Tournament of Champions (TOC) is the most prestigious national tournament for American high school debaters, and in order for debaters to even qualify to compete, they have to acquire a certain number of bids for each level. To qualify for the highest tier of the TOC competition — the gold level — competitors need to collect at least two gold bids over the course of the season. In order to qualify for the lower tier of the TOC competition, competitors need to collect at least one gold bid or two silver bids.

With one gold bid under his belt, Garg has already qualified for the silver LD TOC and is looking to qualify for the gold.

Garg started speech and debate when he was in the sixth grade, originally competing in Public Forum debate. When he entered high school, however, Garg switched to Lincoln Douglas because it is the only event that doesn’t require a partner, and he likes relying on himself.

Although Garg is one of the youngest debaters in school history to have acquired a gold TOC bid, the journey to success was not an easy one.

One large roadblock Garg faced was the lack of Saratoga High student participation in Lincoln Douglas. With only five active competitors, Lincoln Douglas is one of the smallest sub-programs on the speech and debate team.

This lack of turnout has translated into a lack of coaching. Unlike other debate events like Public Forum, which have specific coaches, the Lincoln Douglas program shares a coach with the Limited Preparation speech program.

Garg said the lack of coaching support caused him to look to external coaches and prep teams in order to prepare for tournaments. Garg is currently coached outside of the Saratoga program by Paras Kumar as part of the Debate Drills program.

Although it might seem uncommon, Garg’s choice to use outside coaching is a path historically taken by almost all speech and debate students. For instance, during the previous season, every one of the 11 students who qualified for the speech and debate postseason had  private coaching.

Although Garg was able to largely remedy the lack of Saratoga Lincoln Douglas participation through extra-program coaching, he said the one thing that has been hard for him to deal with is the lack of community within his event.

“It often gets lonely because there's not really anyone to talk with on the team after rounds about the topic of debate in general,” Garg said.

In response, he has formed close bonds with Lincoln Douglas competitors from other schools at tournaments. But with all speech and debate tournaments being virtual this year, Garg said these intra-school relationships have been hard to maintain.

“There is a cost to online tournaments, primarily that they've destroyed most social interaction with members of the debate community who I had grown closer to through in person tournaments,” Garg said.

“I've been competing almost every weekend, which ordinarily would have meant I would have had to fly all over the country every weekend,” Garg said. “But now, I can compete from home, which lets me get way more experience than I usually would.”

Despite his early success, Garg said his goal for the rest of the season is to stay focused on his original goal of finishing his gold TOC qualifier. In terms of his high school career goals, Garg said he is intent on staying consistent with his current success.

“For the rest of my career, I hope to consistently qualify for the TOC every year and eventually make it to late elimination rounds there,” Garg said.