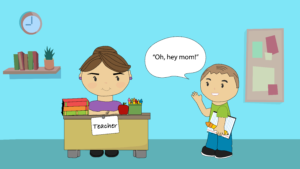 Freshman Jay Louie spends nearly twice as much time at school than the average student. Louie arrives at school at 8 a.m. and does not leave until nearly 8 p.m. — not only because of volleyball team commitments, but also because of the busy schedule of principal Greg Louie — Jay’s father.

From long school days to longer commutes to tight connections with teachers who have known them for years, the children of school staff undergo a different experience than most other students. Unlike other students who live outside of the district, they are able to go to the well-regarded Saratoga public schools because their parents are employees here. Sometimes these students begin attending schools here in kindergarten and sometimes they join in middle school or high school.

Jay, who is non-binary and uses they-them pronouns, estimates a “50-50 chance” of being recognized by people on campus as the principal’s child. Faculty often notice Jay and exchange greetings with them. Jay also occasionally runs into their father during school days.

“I don’t really mind having my dad on campus,” Jay said. “It’s his job, so I just say hello and continue with my day.”

Until 2019, junior Haley Marks had always attended the same school as one of her parents, who are teachers in the Saratoga Elementary School District. Her dad, Josh Marks, teaches 8th grade English and history at Redwood Middle School, and her mom, Sia Marks, teaches third grade at Foothill Elementary.

For most of her school life, Haley, who lives in San Jose, would wake up at 6:30 a.m. in order to arrive at school early, allowing her parents to set up their classrooms for the day. After school, she would stay there doing homework until 4 p.m. while her parents graded papers or prepared for the next day.

Now that she has her driver’s license, Haley has more independence and can avoid the early wake-up times and elongated afterschool stays.

Sophomore Margaret Laver’s daily schedule is also complicated by her parent’s job. She is the daughter of Julie Grenier, the district’s director of technology.

As a result of her mom’s work time, she arrives at school before 8 a.m. and leaves around 4 or 5 p.m. Her dad, a pharmaceutical consultant, picks her up occasionally when board meetings her mother attends sometimes run until midnight. Additionally, due to the increased need for technology during the pandemic, Grenier has spent additional time working throughout the summer and on many weekends.

“The workload definitely affects family time,” Grenier said. “We are doing so much to take care of all our district students, we sometimes run out of time for our own families. Some days, I drop my kids off in the morning and tell them I will see them tomorrow because there is a board meeting or urgent problem at work.”

Laver has experienced the downsides of her mom’s busy schedule. “I don’t like that [my mom] is stressed out,” she said. “We don’t get to see her much sometimes when she’s out earlier or gets back late.”

Being known as a ‘teacher’s kid’

At Redwood, Haley remembers being referred to as “Mr. Marks’s daughter” by her peers rather than by her own name.

Laver, on the other hand, said that she’s not often instantly recognizable as Grenier’s daughter, due to their differing appearances and last names.

When she began attending SHS, Laver hoped to build her own reputation, instead of being automatically associated with her mother. As a result, Laver does not actively tell classmates and teachers who her mom is.

“People will eventually figure out who my mom is,” said Laver. “My mom will sign a piece of paper, show up to open house or teachers will see us pull up in the staff parking lot.”

Close connections with the school community

Before she got her license, Haley would walk to Foothill Elementary School after school, stay in her mom’s classroom and chat with third-grade students until their parents picked them up.

“Third graders are either super cute or have an attitude problem; some nine-year-olds would talk back to me,” she said. “That aside, most of them were super excited to see me and would run up and hug me. I’d give them leftover snacks from my lunch, and read during storytime for them.”

Though she did not interact with her parents much during the day while she was in elementary or middle school, Haley recalled instances where her parents would show up in her classes.

“My dad made it a point to embarrass me if he was ever in the same classroom I was in,” she said. “He’d disrupt the whole class by hugging me from behind, and saying things like ‘Is my sweet precious daughter doing her work?’”

Haley has also come to know other teachers outside of the classroom setting. From chatting with her mom’s colleagues in the copy room to celebrating holidays in her backyard, Haley has developed a close relationship with many staff members.

Haley’s godparents are Connie and Matt Webber, teachers at Foothill and Argonaut elementary school. Marks goes to their house every Christmas to build gingerbread houses and goes to the beach with them every summer to celebrate Mrs. Webber’s birthday.

Haley’s experience with Foothill and Redwood faculty has led her to be grateful and appreciative of the effort teachers put in.

“I’ve seen firsthand the amount of dedication my parents have towards educating and forming a meaningful connection with their students,” she said. “I think, for the most part, being a teacher is a pretty thankless job, so I admire their dedication towards making their students informed members of society.”

Benefits and challenges of having a parent on campus

For Kyle, learning math from his mom at school has been a strange experience.

“It is kind of odd seeing my mom on campus because she’s also my math teacher, so she grades my homework,” said Kyle, who lives in Saratoga and has gone through the school system here.

Kyle finds that having a teacher mom has its benefits despite the strangeness of it. At home, Kyle occasionally receives help on homework from his mother when he encounters a problem he does not understand or needs help in explaining a concept.

As a result of his mother’s occupation, Kyle can also spend more time with her during summer break.

“It’s nice that in the summer, my mom is on vacation as well, so she can really do whatever with the family,” Scola said.

For her part, Haley never had either of her parents as teachers. However, she believes that having her parents at school provides conveniences such as being able to print papers at the last minute or microwaving a cold lunch.

While Haley feels that some people associate her proficiency with certain subjects with her status as the daughter of two teachers, she has “never felt pressured to perform to those expectations,” as history and English come fairly naturally to her, she said.

“I do think my performance in those classes can be correlated to having parents who are interested in the liberal arts and always emphasized reading and writing,” said Haley.

For Laver and Grenier, seeing each other at school is a comfortable and natural interaction.

“I love seeing [my daughter] and her friends in the halls and I appreciate having students I can ask to review tech directions or reproduce software bugs for me,” Grenier said. “I do like knowing that my work directly affects them. I think it’s funny when her friends complain about some tech policy and I know I helped implement it.”

Due to Grenier’s position, Laver also said that teachers often expect her to be skilled with technology, and look to her for help with their devices.

“Teachers will be like ‘Does anyone here know tech?’ and look at me,” Laver said.

Laver feels slightly uncomfortable being judged by her mom’s tech ability and appreciates the opportunity to have a teacher that she does not already know beforehand as it helps her build her own reputation.

Nevertheless, Laver finds that being a faculty kid offers many benefits: access to the staff parking lot, leftovers her mom brings home from staff luncheons and the ability to attend school in Saratoga while living in Sunnyvale.

Despite receiving weird looks getting out of the car in the morning, Laver said that having her mom nearby allows her to receive additional help.

Although close bonds with other faculty members also allow Laver to approach her teachers more easily, Laver said that she does not receive any special treatment.

At the end of the school day, Laver goes to her mom’s office to have a quiet space.

“I like the fact that she works here,” Laver said. “I’ve grown up with the campus and the teachers. It kind of feels like a second home.”