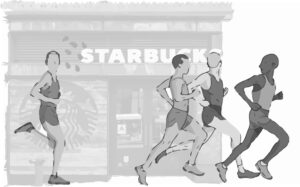 Twenty minutes after the majority of the team returned from their daily run at the girls’ cross country practice in October 2020, then-junior captain Jessie Zhou began to worry. Along with the other two captains, she set out on a search party to find three missing runners.

An hour later, after scouring the whole path for the lost runners, they were found in the tutoring center. They had appeared more 40 minutes later than the rest of the team, and their whereabouts in the time that passed was unclear, according to Zhou. For committed members who count on the motivation of the team to push them forward, seeing the girls disappear to avoid running was both disappointing and concerning.

Zhou attributes the lack of motivation in new members to the number of runners enrolling in sports like cross country just to fulfill PE credits. Sports most vulnerable to this tendency are ones viewed as low effort or commitment. In order to fulfill the 20-credit requirement for graduation, many students enroll in uncut sports. There are two common reasons for this — students want to take as many academic classes as possible or they believe that sports are less of a time commitment than the PE class.

In reality, sports average more than seven hours of practice a week while PE classes require between three to four and a half hours. This time commitment does not include hours that athletes put in on their own, combined with the increased physical strain in most sports.

The number of unexpected enrollees has mixed effects on sports teams. For some teams, this means the culture of practices changes based on overall effort, while others see no effect from the rise in participation.

Zhou said some newcomers to cross country have had negative impacts on the team because of their questionable motivation.

“It’s super frustrating when we get a lot of girls coming in sophomore or junior or even senior year because they’re thinking, ‘Ok, I need PE credit … why not cross country, I’ve heard it’s the easiest sport,’” Zhou said. “And when they come in with that mindset, you start to see people hiding in Starbucks or quitting halfway through the run, and it’s so discouraging as a captain to see that people aren’t taking this sport that you love seriously.”

As a result, Zhou said that the captains were forced to change the culture of practices last year, docking points from overall grades or setting time limits for runners. While their coach, Danny Moon, tries to let athletes naturally push themselves out of passion, Zhou said this approach does not work when newcomers take it as a sign that they can slack off.

“There’s a certain point where the captains realized this was not going to work,” she said. “Over time, cross country transitioned from a positive and supporting environment into one where we eventually needed to remind them daily of their commitment.”

Swimming, another virtually non-cut sport, also sees a number of students taking it largely for PE credits, according to senior Taesu Yim. For his part, Yim does not believe the intention for taking the sport matters, given that all participants swim the same sets and attend the meets together. “I suppose that people who take it purely for the credit might be less enthusiastic or energetic during practice, but I haven’t noticed anyone being too vocal about it,” Yim said.

Since the reasons for an athlete taking the sport do not affect the team culture, Yim said a student’s motive for joining does not matter as they end up bonding the same way as they cheer each other on.

“If someone ends up unintentionally experiencing all of that, I’m all for it,” Yim said.

Badminton, also attracts a large number of students who seem to join to avoid taking PE or to be with friends, according to junior Evan Oaklander. Still, Oaklander does not feel these members affect the motivation of the more serious players.

“There was definitely a split between those who were taking the running/conditioning seriously and the majority who didn't,” Oaklander said. “I don't think this was exclusive to those who joined just for credits though, since a lot of people just don't like running in general.”

Oaklander said he often sees people walking on the track or not trying that hard during practice. Although he tries not to let those who do not care affect his performance, Oaklander said that at times he feels annoyed, but he assumes best intent as it is “not reasonable to expect everyone to put in 100% effort.”

Oaklander does not feel those enrolling to complete PE credit is a bad thing, since “everyone has to start somewhere.” The bigger problem is that people underestimate the training involved in badminton; those who join are often unaware that badminton is not an easy way to fulfill credits.

“It's completely possible for someone who joins on a whim to get invested in the sport,” he said. “I just think that people should be more aware that badminton, just like most other sports, does require some level of effort and that it will be hard to get much out of it with a low-effort mindset.”