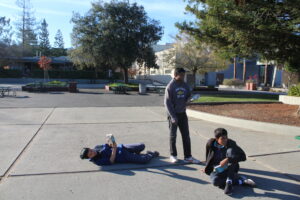 Students practice for a scene they're rehearsing for their English 11 Honors final — part of Shakespeare's "Hamlet."

Students have become accustomed to a certain type of final: usually sitting down with a pencil and paper and spending hours dumping a semester’s worth of knowledge onto paper. Whether it be multiple choice, short answer or an essay, students are just cramming, writing and — too often — forgetting much of what they just learned.

In recent years, though, many English classes have taken a different approach to finals, especially when teaching complicated works like those of Shakespeare. Performance projects are now common.

“Plays are best experienced, understood and absorbed as a theatrical experience,” English 10 teacher Ken Nguyen said. “A performance project — and all of the subcomponents that are required of this particular task — engages students in accessing a number of different skills to showcase their understanding and mastery.”

For most performance projects, English teachers follow the same basic outline. Students, in small groups, choose a scene or a part of a scene such as a character’s monologue. They spend some time annotating and learning them and eventually these scenes are performed in front of the class.

The key points students are graded on in this type of project are the memorization and understanding of their lines, as well as how much rehearsal was put into the scene. This is seen through how smoothly the scene is performed.

Some like English 10 teacher Emily Wu ask their students to do a little more. To receive a high score on her “Julius Caesar” project, students have to creatively incorporate props and costumes into their scene. She is also asking students to use a different setting in the scene to show creativity and originality. These projects are usually worth around 100 points, which is similar to some finals.

“We don’t intend for a performance project to replace standard finals, but it lines up well with the rest of the semester,” English Department chair Ken Nguyen said.

Acting out scenes from plays is not just a convenient way to wrap up a unit. There are certain skills English teachers want students gain by doing it.

“My hope is that students will be able to see the play in the way it’s supposed to be seen,” Wu said. “We do a lot of read-throughs and run-throughs with the plays, but I’m hoping students are able to really see how much it takes to put on a production and what Shakespeare’s intention was in creating this play in the first place.”

Students have time to prepare their scenes and make sure they get the most out of their section as they can. Spending more time going over the text in preparation improves students’ understanding of the play.

Sophomore Tia Jain, who did a performance project for “Romeo and Juliet” as a freshman, said that the scene she was assigned allowed her to go in depth into the material.

“I annotated my lines, and I knew exactly what was going on,” Jain said. “I feel that I didn’t really retain a lot of the information just by watching the entire class’s performance, but for my particular scene it was helpful.”

Jain also feels that the project is more stressful than a traditional final, because standing in front of a class full of peers is nerve-wracking, but in doing so, she gains valuable insight about the text.

“Just learning the lines is pure memorization, which isn’t that hard,” Jain said. “We have to think about the tone of our lines, and the context behind it, which makes it a lot harder, but it also lets us learn about our scenes much more in-depth.”

Performance projects are typically found to be successful and fun for students. After doing them freshman year, many sophomores and upperclassmen are eager to repeat the project for different plays.

This year, in the English 10 class she is taking with Nguyen, they are doing another performance project for “Julius Caesar.”

“I think it’ll be fun to do,” Jain said. “I’ll get to choose my favorite scene, where Brutus has a soliloquy where he lists all the reasons for why he why he wants to kill Caesar. I think it’ll help me understand it better.”

Sophomore Fiona Lee is excited for the performance, and despite the demanding requirements being stressful, she prefers a performance project to a standard final, because she thinks it is a creative alternative.

“It’s hard to memorize an entire speech, because Antony doesn’t speak like normal people would,” Lee said. “However, it’s kind of a stress reliever to have a fun project with peers among all the other normal finals.”

Using performance projects to conclude a unit on Shakespeare’s plays is a great way for English teachers to educate students on not only the content but also the spirit of the book.

“It was never meant to just be read, or sat down with,” Wu said. “It’s supposed to be on a stage with props and lights and directions and performing it in class gives it its intended purpose.”