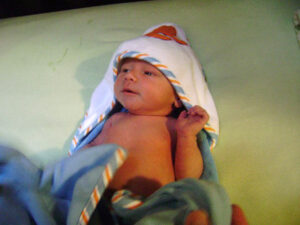 The fall season is an exciting one for two teachers who recently gave birth. Between the end of October and beginning of November, guidance counselor Frances Saiki gave birth to a baby girl, Mirai Faith Saiki, and math teacher Jennifer Mantle welcomed a boy, Dylan Mantle, into the world.

According to guidance counselor Alinna Satake, Mirai is a big eater but is doing well.

“She doesn’t sleep much at night, so Ms. Saiki has been on a tough schedule lately,” Satake said.

Saiki is tentatively expected to return on Jan. 31. Until then, guidance counselor Dina Cunha-Lee has been filling in for her.

Mantle gave birth to baby boy Dylan Mantle on Sunday, Nov. 7, at 1:30 a.m. He weighed in at about 7 to 8 pounds, math teacher Kristen Hamilton said.

Hamilton said that mom and baby are doing well, and Mantle is expected to return to school in mid-January. Her replacement has been former teacher Larry Bingham, who retired two years ago.