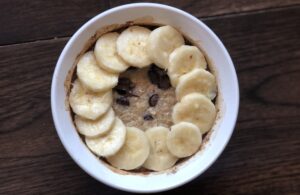 After discovering TikToker Halle Burns, a vegan recipe developer, my For You page transformed. I was instantly transported to the food side of TikTok. Every other video I watched contained viral TikTok foods like mini pancake cereal, baked oatmeal and aesthetic cakes.

Because I was stuck at home during spring break, I decided to try one of these recipes in order to cure my chronic boredom.

After scrolling through my For You page for four hours straight (as one does), I found a baked oatmeal recipe that caught my attention. The recipe was called “banana bread baked oatmeal.” Instantly, my mouth started to water since banana bread is one of my favorite foods.

Not only did it sound delicious, but the recipe was also incredibly simple. All I had to do was mash up half a banana and put it in a ramekin with half a cup of oats, half a cup of milk, some cinnamon and chocolate chips. Then, I popped it in the oven for 25 minutes at 350 degrees Fahrenheit.

I topped the baked oats with slices of banana, and it looked like a blessing from the baking gods. As they say, you eat with your eyes first, and my eyes had surely devoured a delectable dish.

Not only did it look scrumptious, but it also smelled amazing. It had a beautiful fragrance, laced with the scent of cinnamon and dark chocolate.

Eagerly, I stuck my spoon in and took a bite.

Immediately, my smile dulled and my excitement faded away as I forced myself to swallow what I soon discovered was putrid oatmeal. The texture was unbearably mushy, instantly triggering my gag reflex. I felt like I was eating old people's food, as I imagine something so gloopy and gross could only be tolerated by people who have lost all their teeth.

The root cause of this disastrous texture was most likely from the mashed bananas. Apparently they did nothing to elevate the taste of the dish either, as the milk and oats diluted the flavor.

To make matters worse, it didn’t taste anything like banana bread, which was the whole reason I had wanted to make it in the first place.

After this epic fail, I decided I was done trying to make TikTok foods for a while, so I whipped up a nice bowl of Lucky Charms instead: so simple yet so delicious and infinitely better than my TikTok-inspired oatmeal.