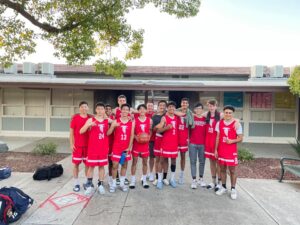 Boys’ basketball poses for a team photo at Mountain View High School on July 16, when they won first place at the Mountain View tournament.

For many, the year over quarantine severely strained friendships, and Falcon athletes had it no different. However, when preseason started, many teams kicked off right where they left off two years ago: pumped with high expectations for upcoming in-person seasons with no signs of withered relationships.

As it turns out, social distancing protocols did not deter team bonding; the majority of teams who kept in contact over text or video calls continued to follow most of their team traditions.

Boys’ basketball: A team both on and off the court

While the boys’ basketball team had far fewer team dinners over quarantine, players bonded through practices in outdoor courts and virtual challenges, often hosting competitions to see who worked out the most that week.

The team maintained an active group chat, where they shared challenges and tracked results on a spreadsheet.

“It was very obvious when we started last season that we were strong because we were a team both on and off the court,” senior Christian Li said. “I felt like we were one of the only organized teams out there, and that’s mainly because our coaches were able to provide access to the outdoor courts when other teams couldn’t practice.”

Though the team was unable to play with other high school teams in team camp at UC Santa Barbara like usual, they took a trip to Anaheim in the summer to compete with club teams in a four-day Amateur Athletic Union (AAU) tournament last year.

As part of their trip, the boys watched “Black Widow,” went F1 racing together and toured Disneyland in a full-fledged trip focused on “growth … [as well as] performance.” According to Li, the team bonded by staying up overnight playing Avalon at 1 a.m. against the wishes of their coaches, shutting off the lights and keeping quiet whenever they heard footsteps approaching.

“Something unique about Saratoga’s basketball team is that we’re always together doing something, whether it’s joining a workout or playing summer league,” senior Ishaan Bhandari said. “[Playing games] was all voluntary. We could’ve sat in our rooms and went on our phones, but we all wanted to come together.”

Bhandari added that team chemistry helped the team perform better because members all trusted one another. Last year, the team had a collective record of 21-2 in the AAU season.

Every year, the team also visits The Cheesecake Factory for a gift exchange and dinner afterward, a tradition that started with their coach, Patrick Judge, 14 years ago when he was coaching JV basketball at Santa Teresa High School. Despite COVID-19 restrictions last spring, the team was still able to make it happen and are now planning another dinner this December.

“Many of my fondest moments with friends and family have been at the dinner table, so I wanted to pass that on to my basketball family as well,” Judge said. “All of the trips, lunches, dinners that we do as a basketball program are not only great team bonding experiences — which lead to greater teamwork and success on the court — but also create lifelong memories.”

Li said the team is optimistic about the team “winning big,” in what for a majority of team members is their senior year.

With the loss of small forward Cameron King to graduation last year, the team has “no star player” this year, Li said. Thus, everyone on the team plays a crucial role and depends on each other.

“A lot of us are willing to work hard for one another versus putting individual stats on the board,” Li said. “For us, it doesn’t matter who plays well or who doesn’t. We all win as a team and lose as a team. That’s our mindset. That’s the chemistry.”

Last year, the field hockey team noticed a lack of unity and commitment between players of different positions. Senior co-captain Rima Christie attributes the disconnect to a lack of verbal communication; she said that this year the team is focusing more on communicating and bonding regularly with players.

With a 13-player roster, the girls often split up in three cars and drive to cafes to get boba on Tuesdays after practice, a tradition that started during the pandemic when traditional options for team bonding weren’t feasible.

In addition to Boba Tuesdays, the team hosts annual sleepovers and Friday-night dinners. Athletes use these opportunities to get to know each other and talk about matters unrelated to school or sports.

This year, the varsity field hockey team has eight seniors and seven underclassmen. The abundance of seniors on the team also has an impact on team chemistry as captains aim to provide leadership and maturity to new players. Desai said working with the team builds her up and gives her the confidence to face her opponents.

Current seniors on the team include Christie, Desai, Kinoshita, Lauren Yarrington and Lauren VandeVort. All five seniors have been playing the sport together since eighth grade.

“It’s crazy how much we’ve grown throughout these years,” Desai said. “We have a really strong team of girls who’ve grown a lot from not knowing anything to learning our basics to getting a lot better. Going through these ups and downs together made us really strong as a team.”

Although the boys’ water polo team doesn’t have many traditions — the only ones being fast-food restaurant dashes after workouts and a specific TOGA cheer before every game that the team created in 2018 — senior co-captains Kendal Jarvis and Marcus Kuo are focusing on creating new ones.

Late coach Jerome Chung, who had been head coach for the 2019-20 season but passed away unexpectedly at age 37 the month before the 2020-21 season, left a profound impact on the boys’ practice routines. He created an online folder with over 70 plays that repetitively hone in on specific skills, a tool the captains have continued to use for its effectiveness.

In previous years, Jarvis said Chung’s old-school coaching style helped bring the team together. Now, he and Kuo are forced to lay into the players more as new coach Michael Fleming primarily focuses on training the underclassmen. The team is first in the El Camino League with an 14-1 record, as of Oct. 22.

“I feel like our recent success has made an opportunity for us to build traditions not only celebrating success, but also instigating team bonding,” Jarvis said.

So far as part of bonding, the team has been eating out at restaurants such as In-N-Out, Maggiano’s Little Italy in Santana Row and BJ’s Restaurant & Brewhouse in Saratoga more often. Kuo recalled that the team didn’t eat out much last year because of the pandemic and not as many of the boys were able to drive. While the team only goes out for whole-team meals at the beginning and end of each season, he said some athletes often get food together after games.

In addition to more frequent team meals, members have adopted a new tradition — wearing attire in honor of Chung.

The boys’ swimsuits now have Chung’s initials on the side in Carolina Blue, Chung’s favorite university and color. On special occasions, the team wears “Jerome” T-shirts in the same shade, a tradition that has helped pull the team together.

“I’ve been trying to be as constructive as I can with criticism, especially as a captain,” Jarvis said. “I think about what Jerome would tell me to do as a leader, and I make decisions accordingly.”