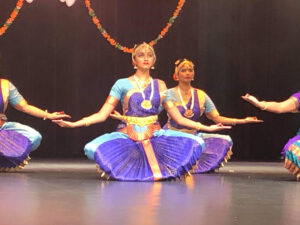 With butterflies in her stomach, sophomore Ishanya Hebbalae stood in front of the Cupertino Library with her Bharatanatyam dance group and tried to run through the dance one more time. The music started playing, but Hebbalae suddenly forgot her part in the dance. However, as the song continued, she calmed down and found her rhythm, finishing the classical Indian dance gracefully.

Two weeks later, senior Prosper Chiu stoods firmly on the mat alone, swinging his broadswords with determination. He struck his sword in the air and finished his performance proudly.

To many people around the world, these performances wouldn’t qualify as true sports. But for people like Hebbalae and Chiu, the definition of sports is broader, often representing family or cultural traditions. Cultural sports like martial arts in East Asia or Bharatanatyam dance in South India all date back to the Middle Ages.

Hebbalae started practicing the Bharatanatyam dance when she was 5. Bharatanatyam is a style of dance predominantly from the southern Tamil Nadu and Karnataka regions of India.

“The dance is a forefront genre in India. It has religious themes, and it actually influenced many other classical dances in India,” Hebbalae said.

As a U.S. resident, Hebbalae sees the dance as a way to stay close to her culture.

“I started these dance lessons because Bharatanatyam is very close to my culture as a South Indian,” Hebbalae said. “It’s a way to keep connections.”

However, Hebbalae expressed that there are challenges in practicing cultural dance here. People have trouble understanding the true meaning behind the dance.

“The dance is very dignified, and it usually tells a story,” Hebbalae said. “There aren't many people who really understand and can convey these correctly.”

Hebbalae said that from learning this dance, she learned a little bit more about her culture and the important musicians and writers of India.

“My dad is really into Tai Chi, so he wanted me to do some type of cultural sport,” Chiu said. “This is like the one Asian thing I do other than eating Asian food and speaking to my parents.”

Chiu focuses on performance-based martial arts — dual broadswords — rather than action Kung Fu. He  has also performed in many stadiums for showcases and endured many hardships from his endless hours of practice. Like Hebbalae, one of the hardships for Chiu is that people have a misconception about what martial arts actually is.

“When people think of martial arts, they think of fighting people with weapons and killing others,” Chiu said. “We do have weapons, mine is the sword. But when my friends saw what I actually did, as if I was just waving around the bendy swords, they’re like ‘that’s kind of lame.’”

Chiu admits that despite the challenges he’s faced, martial arts makes him a more mature person, and he will continue doing this sport in the future.

“I learned a lot of discipline, since my coach is really strict,” Chiu said. “If I was late, I would need to do 100 pushups for that.”

Hebbalae and Chiu both feel a strong sense of pride in their own culture carried out by their traditional sports.

“No matter how far away you are,” Hebbalae said, “culture never dies.”