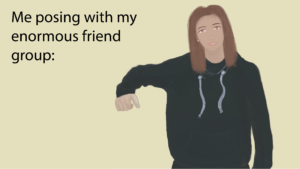 Permalink
My motto is ‘fake it til you make it’ — it’s cliché because it works.

Editor’s note: Please know that this story is in no way indicative of whether I have friends. The suggestions in this story do NOT necessarily stem from personal experience.

10. Lose all your friends

You can’t fake having friends unless you actually don’t have any.

9. Talk about all your friends

Nobody has to know they’re actually nonexistent.

8. Pretend you’re on a phone call as you walk across campus

You’re just having a busy social life with your mom.

7. Stand next to a group of people and face them

From far away, it looks like you’re talking with them. Bonus points if you pretend to stare at your phone so you won’t make eye contact when they look at you awkwardly.

When you attend club meetings, you’ll automatically look like you’re friends with a group of people. Maybe it’ll even get you accepted into Stanford.

5. Do homework during lunch

Nobody will question you. It’s a perfectly acceptable excuse for not socializing: You’re being that stereotypical, studious Saratoga kid, or you’ve simply procrastinated on your homework — either way, people won’t think you’re just a loser.

Photoshop other people into photos with you to make it look like you have a social life.

Take oddly-cropped photos. There’s people just out of the frame; you’re being an incredibly considerate person trying to protect their identities, of course.

2. Take close up shots of your face with little to no background, post it and add a vague caption like “So excited!!”

1. Throw a Hail Mary: Embrace not having friends — maybe even make it painfully obvious

Thanks to reverse psychology, people will assume you’re only just saying that, but you actually have a ton of friends. If that doesn’t work and people actually believe you, it’s not all a loss — some extrovert is bound to pity and adopt you.