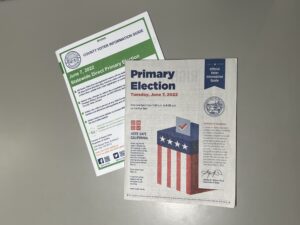 Top 10
Did you receive your voter guide to local, state and federal midterm primary elections? Take a closer look at some of the candidate statements.

“Our governor rightfully said, ‘California looks like a third-world country.’”

“We are sovereigns, not serfs.”

“I am running for U.S. Congress to oppose [Dr. Anthony Fauci] and his disastrous COVID-19 policies, especially his relentless push to get everyone vaccinated with the deadliest vaccines in history.”

“‘Climate change’ is a total lie — they are too cowardly to debate.”

“Capitalism enables corporate masters to exacerbate [the] crisis of health, poverty, oppression, climate change and war in allegiance to profit … This senate campaign is about building that socialist system change.”

“India eradicated COVID-19 with widespread early treatment  [using] safe, inexpensive, generic ivermectin … We could have, should have, done this.”

“In my campaign for sanity my background and qualifications are: The poisonous fake vaccines don’t work, stop infection or transmission.”

“I pray our Heavenly Father will bring light to the plight of the world, ease your daily crucifixion, and complete economic resurrection for our American family — this is the way.”