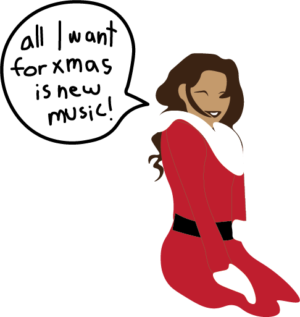 Christmas
As ‘All I want for Christmas is You’ climbs its way up the charts again, revisiting some Christmas classics that aren’t by Mariah Carey can help you attempt to escape her music.

This song may remind me of the blatant lack of snow here, but it’s a wonderful song and deserves a place on this list.

This list wouldn’t be complete without at least one version of “Have Yourself a Merry Little Christmas,” and Frank Sinatra’s version, with crooning vocals and catchy instrumentals, definitely did it best.

Sufjan Stevens does it again with his cover of this Christmas classic. Although Stevens’ Christmas album has a lot of great tracks, this is definitely one of my favorites.

One of the most iconic Christmas songs ever.

No other song could get away with having a literal reindeer neighing in the first 20 seconds of the track.

6.“It’s the most wonderful time of the year” : Andy Williams

Christmas is definitely the most wonderful time of the year, and William’s vocals only make it better.

A Christmas song about a soldier stationed overseas trying to make it home to his family should be hard to relate to for most of us, but it continues to be one of the most-streamed Christmas songs because of its beautiful instrumental and sentimental lyrics.

The ‘Dean Martin Christmas Album’ has lots of hits, but the cover of Bing Crosby’s “Silver Bells” is the most impressive, with the choral background and impressive incorporation of silver bells into the song.

This acapella single of Fleet Foxes’ self-titled album has the perfect combination of mellow vocals and a simple backing track for the perfect Christmas song.

Even though the song might be based on Joni Mitchell’s tragic breakup, this Christmas folk song is one of the most beloved of Joni’s discography.

This 1984 classic still manages to chart every holiday season, and for good reason. Even though it’s upbeat, the combination of sleigh bells and synths gives it a nostalgic feel unique to Christmas time.