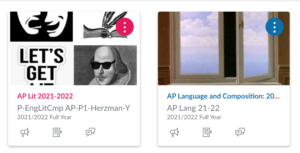 Permalink
Senior “doubler” in both AP-level English classes evaluates common myths, and reminds students that the choice is not as binary as it seems

If you’re an underclassman envisioning your incredibly exciting academic journey, or a junior having doubts about your senior year schedule (I sympathize), my humble opinions here might be of interest to you.

When I was a junior, the only piece of information I received to inform my decision was that “Lit has more reading, and Lang has more writing.” Knowing that I love both reading and writing, I decided to take both classes plus Newspaper, amounting to having half of my classes in the English Department.

However, I’ve found the dichotomous classification untrue, because in all honesty, the two classes do the same amount of writing: a highly manageable load, despite both boasting obnoxiously long course names with the word “composition.”

In general, I’ve been doing less writing in either Lit or Lang in person than I did when taking English 11 Honors online last year. In the first semester of Lit, I wrote two essays, a three-page paper and a six-page essay. In the first semester of Lang, I wrote a 500-word setting description and an argumentative essay with no length requirement. There were also a few informal classworks and some timed writes for AP exam preparation, but, again, neither class has nearly as much writing as English 11 Honors.

If you are daunted by writing, don’t fear either class. If you want more writing, hey, we could use more Falcon reporters.

In the beginning of the year, this was somewhat true. Lit assigned endless pages of easy reading, while Lang assigned a few pages of indecipherable excerpts. I was jarred by the juxtaposition of Lit’s sudden load of 100 pages per class and Lang’s meager three pages per class. Furthermore, the accessible verses of “The Odyssey” were the antithesis of some confounding philosophy written in Latin by a French dude born in the 1500s who decided to meditate on whether a table is really a table. Seriously!

However, this dynamic soon evened out. Lit readings increased in difficulty and decreased in page count as we ventured into Shakespeare and poetry, not to mention in Lit Circle readings, groups of students braved works such as Dostoevsky’s incomprehensible “Crime and Punishment.” On the other hand, many Lang readings encompass modern works of psychology and journalism that go on forever, but are presented in simple English.

Ultimately I may have spent a little more time on Lit readings, but the difference is minuscule.

Now, this is not a myth, but the distinguishing factor I wish hadn’t been overshadowed by trivialities like the amount of writing and reading.

Lit only analyzes fiction and is structured like the English classes from ninth to 11th grade, with great emphasis on text analysis. It also surprisingly contains a substantial amount of acting, since all four first semester readings — “The Odyssey,” “Oedipus Rex,” “Macbeth” and “Hamlet” — were meant to be performed. Fooling around with equally enthused classmates in a comfortable environment forged some of my fondest memories this year.

On the other hand, Lang is a philosophy course with a touch of argumentation — nothing like the English classes you’re used to. On a typical day, we hop between small-group discussions and whole-class discussions about the previous night’s reading, covering units that question “What do we know?,” “Who am I?,” “What is ethical?” and so on. I thoroughly love the thrill of having my deep-rooted beliefs challenged by clever arguments from readings and classmates.

In short, if you’re a voracious reader and enjoy an audience, consider Lit. If you’re introspective and embrace intellectual challenges, consider Lang. I’ll even dare to say, the former is more Gryffindor-Hufflepuff while the latter leans toward Slytherin-Ravenclaw, though I never felt that House classifications are mutually exclusive.

That said, Lit versus Lang is not a binary choice. You can always take Saratoga’s unique MAP program or English 12. However, here I’d like to advocate for my choice of taking both Lit and Lang — known as a “doubler.”

I am no doubt doing a lot of reading and writing compared to my peers, but the intersections between the two classes make it very rewarding. Case in point: A unit in the Lang curriculum inquires as to whether we have free will, a topic explored in all four first semester Lit readings. Examining this question through both philosophical and literary lenses allowed for enhanced critical thinking.

I know our community is heavily focused on STEM, with the English requirement often treated as a burdensome necessity. I won’t try to convince you that literature or philosophy should be your foremost passion in life, for I acknowledge that math is far from mine. But I invite you to try both classes, where you’ll find doors to topics — empathy, agency, morality and more — that speak to all of us as humans.