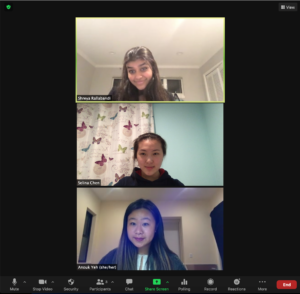 That’s because winners were being announced at the California Coast District Qualifiers award ceremony, the culmination of a grueling speech and debate tournament in which competitors battled for four spots to go to Nationals.

Finalists, all of whom had their cameras on, turned them off upon getting called from lowest to highest in rank. One by one, students’ Zoom tiles went black.

The last screen still on for program oral interpretation belonged to junior Anouk Yeh. She not only qualified for the National Tournament but had done so as first seed.

“The success of our team this year is entirely due to the creativity, originality and dedication of the individual students,” coach Erick Rector said. “They're the ones that have put together speeches that are inventive, highly relevant and well-orchestrated, and they should get all the credit.”

Rector even had to put up with good-natured joking and pleading from members who said he had promised to shave his head if a certain number of them qualified. (The "dispute" remains unsettled and his head is still unshaved.)

The success at national qualifiers came two weeks after the Coast Forensics League state qualifiers on March 7 in which freshman Cameron Nguyen qualified in original prose and poetry and Yeh and Chen qualified in their respective events to California States. Additionally, freshman Esabella Fung placed as sixth alternate in original advocacy, an event where students need to advocate for a specific piece of legislation.

Fung’s speech advocated for the Paycheck Fairness Act, which will ensure a fair interpretation of the Equal Pay Act so that all genders receive the same wages. She prepared for the tournaments by looking at judges’ feedback, from which she learned that she should speak at a slower pace with better inflection and poise, she said.

“I was extremely nervous going into the final round,” Fung said, “but it was a fruitful experience to watch the other competitors and learn how they use gestures and tone to make speeches more engaging.”

At nationals qualifiers, sophomore Arnav Garg also advanced to the final round in Lincoln-Douglas Debate (LD).

“Going into finals, I became considerably more invested and was a little disappointed when I was just one judge ballot away from qualifying,” he said. “But it was still worth the effort because I learned a lot of things I can cross-apply to circuit debate, such as combining persuasion with technicalities.”

Garg’s advancement to the final round put more pressure on him for the next season, he said, because he will now continue holding himself to that standard. He is currently preparing for the Tournament of Champions (TOC), which will take place in April.

“There’s very little room for error, so I try to avoid putting that stress on myself,” he said. “I just take each round in a vacuum.”

In addition to the TOC, other postseason tournaments include the California State Championships in April, National Independent Event Tournament of Champions (NIETOC) in May and Nationals in June.

Rector’s hope for these postseason tournaments is that the qualified students put forth their absolute best effort to showcase their talents — and have a fun time doing so.

“I think that [the success at the two qualifiers] is just the beginning of a much grander and more consistent success that Saratoga High School is going to see,” he said.