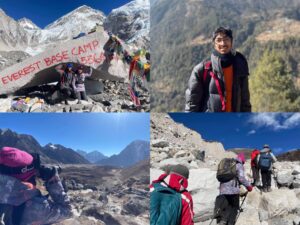 Top left: Omkar and Maithili Kulkarni pose in front of the Everest Base Camp stone. Top right: Omkar was smiling on the way to Tengboche village from Namche village. Bottom left: Maithili was taking a photo of the view with a Cannon camera. Bottom right: the Kulkarnis were hiking on boulders.

At 18,519 feet, sophomore Maithili Kulkarni and her brother, senior Omkar Kulkarni, along with their parents, uncle, and a cousin, held on to each other at the peak of the Kala Patthar mountain. Looking down, the serenity of the Himalayas and the grandiose glaciers below awed them. Behind them, the 100-mile-per-hour winds quickly blew away their trail of footprints.

It was winter break and the family’s second time climbing the Himalayas, but they decided to take it slow due to the lack of rigorous exercise beforehand. Rather than taking high elevation pills and rushing through the journey in 10 days, Maithili and Omkar walked six to 10 hours per day from lodge to lodge to allow their bodies to naturally adapt to the high elevation. Their climb lasted 17 days, from Dec. 19 to Jan. 4.

Even with the ongoing COVID-19 pandemic, the family insisted on continuing their journey while following COVID-19 guidelines throughout the hike such as wearing masks and social distancing. However, the unexpected did happen as Omkar suffered from a throat infection for four days but was able to recover by taking the medicines the family brought with them.

“I wouldn't say [the pandemic] had a big impact,” said Omkar. “Maybe it was a stress factor at the beginning, because truthfully, we as a family didn't think we were going to go on this trip until maybe like two or three days before.”

The family took the same route as they did in their first Himalayas journey, which was in winter of 2018. The hike officially started at Lukla, a town they reached from a flight from Kathmandu, the capital of Nepal. From there, they hiked  to the famous Mount Everest base camp, which is the starting point for people who plan to summit the world’s highest peak. After three days of staying in the village of Gorakshep at the base camp, the family hiked back down to the Tenzing Hillary Airport.

During the hike, Maithili and Omkar marveled at the breathtaking views.

“The landscape transitions are really cool,” Omkar said. “At the bottom, we’re following the river, and we’re following the valley up. There's trees and there's greenery, as well as forests. But as we go gradually higher and higher, at around 13,000 14,000 feet, there's none of that there's only planes and shrubs. Then we go higher. There's basically nothing alive. We’re walking over large boulders and ice.”

Still, both Omkar and Maithili agreed it was the people of the Sherpa culture, a Tibetan ethnic group native to Nepal and the Himalayas region, that stood out. Having virtually no crime in their villages, the owners of the lodges always welcomed and embraced the family with their local cuisines.

“It was funny that these people who have summited Everest eight times were cooking us noodles and serving us food,” Maithili said. “Everybody there is so good-hearted, and they truly want to take care of you.”

Omkar and Maithili encourage others to go to the Himalayas as the hikes don’t always not require rigorous training or advanced gear such as oxygen tanks (while climbing the highest peaks there almost always do).

“Whenever people hear about climbing the Himalayas, they always look at us with wide eyes saying, ‘Are you crazy?’ And maybe we are, but we had a really good time,” said Maithili.