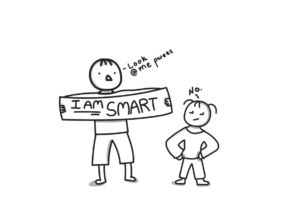 If you’ve ever walked past a group of students nervously ranting about an upcoming difficult math test, you’ve probably heard this phrase of reassurance uttered a million times: “You’re smart. You’ll do fine.”

The term smart is often put on a pedestal. Being smart is equated to excelling academically and obtaining high grades without much effort. It’s equated to the ultimate golden ticket: acceptance to the most prestigious schools.

Among parents, the word is often thrown around as a form of compliment, as if having a smart son or daughter instantly denotes a promising future.

However, imposing the “smart” label on students as a means of reassurance or praise often has the opposite effect of the original intention. Not only can it increase stress levels, it also labels academic success as a fixed measure of intelligence.

As a disclaimer, I unintentionally use smart too. But in most situations, the word can have unintended, detrimental consequences if utilized in the wrong way.

In 2007, Stanford psychologist Carol Dweck coined the terms growth mindset and fixed mindset. People in the former category believe they develop and grow their skills and knowledge through hard work. People in the latter believe talent and intelligence are fixed, measurable and unchangeable quantities one is born with.

Surely, the growth mindset seems like common sense: There’s no way anyone could know calculus the minute they start kindergarten. They have to spend years learning and developing their math skills through hard work to achieve that peak.

Saying that a student got good grades because they are smart perpetuates the fixed mindset by implying that they have the tangible trait of intelligence, whereas others lack it. This kind of thinking completely invalidates other factors that play a much larger role in academic success, including study strategies, habits, time management, dedication, hard work and family environments.

In fact, the numbers show that this idea of smartness more or less doesn’t exist. Because 95% of the population has an IQ within two standard deviations of the average score, the majority of the population does not have enough variation in natural levels of intelligence to be significant in contexts like schools. Moreover, studies have found that self-control and the ability to deal with failure are more reliable predictors of GPA than pure IQ, which brings me to my next point.

Just imagine: If you are the person who’s fallen into the trap of wanting to be known for being the smart kid at the school, wouldn’t you want to maintain that reputation? What worse way to tarnish your reputation than to look stupid by failing horribly?

This is one of the biggest consequences of putting the word smart on a pedestal: Some people may begin to associate failure with stupidity, the antithesis of intelligence, even when they are far from the same thing.

I do want to note that not everyone is necessarily affected by this in equal measures. For many high-performing, intrinsically motivated students, failure is a source of motivation and a means of improvement. But for some lower-performing students who may feel insecure about their own academic success, the desire to be labeled smart instills a fear of challenges because it increases this chance of failure. They may opt for easy shortcuts like cheating because it maintains their desire to look smart to their peers or parents, pushing them further from academic success.

Lastly, few of us have the authority to call someone smart in the first place. In most scenarios, it’s merely an assumption based on a limited amount of information. Just like an assumption about someone’s background based on their physical appearance is rarely accurate, an assumption of their performance on a particular assignment or test can be wrong. Everyone has their personal strengths and weaknesses; Categorizing people based on smartness fails to consider them as holistic, human beings.

Of course, in most situations, people don’t mean to use the word smart with ill intentions — usually, they are just trying to congratulate or compliment somebody for an achievement, or reassure someone when they feel insecure. But if used repeatedly as a label, the word loses all of its intended meaning and promotes these unhealthy mindsets.

In the long run, being smart simply doesn’t mean as much as hard work, dedication and an ability to deal with failure. Pushing students to try and take risks enables students to thrive in a supportive environment based on their own goals, regardless of others’ perceptions of them.