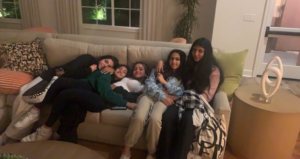 I honestly believed people when they told me that middle school friendships don’t last.

The idea of coming into high school without my closest friends, in a drastically new and different environment with hundreds of unfamiliar faces surrounding me, was very intimidating.

In the end, however, having the same people around me, who I’ve known since age 10, has made the transition much more bearable. I used to complain about Saratoga’s three elementary schools, one middle school and one high school system, but it ultimately helped my friend group form closer bonds with each other.

The memories we’ve made over the past six years, the bond all of us still have with each other and the enjoyment of each other’s company is what makes this group so special.

Ever since fourth grade, when I moved to Saratoga, I have had the same core group of friends. I came to Foothill Elementary not knowing anyone, but I was invited to sit with a group of girls at lunch. We stayed close for the remainder of elementary school and middle school, and our friendship is stronger than ever well into my sophomore year of high school. It’s hard to believe that I have been friends with the same people for over six years, but I think it’s a good thing.

Beginning in elementary school, our group bonded over similar smaller interests like playing with slime and squishies. Hanging out on the weekends and walking around in Montalvo’s arboretum happened to be our favorite pastimes.

In middle school, downtown Saratoga was our favorite spot to hang out after school on Redwood’s “SLCT” half days. Strolling down Saratoga Avenue with 50 other hot, sweaty middle schoolers all desperate for a refreshing drink from the Starbucks a mile away is a memory I will never forget. Wildwood Park was our designated hangout spot and we must have tried just about every restaurant downtown for lunch.

Now, because of Saratoga’s singular, relatively small high school, we have been able to have classes with each other every year. Last year, as freshmen, one of my friends and I shared five classes. In spite of being online, we became closer than ever — Facetime calls every night to do homework and catch up were the biggest motivating factor for me last year.

Having a group of friends in which everyone feels so close to each other is very comforting. Knowing everything about each other means that we can confide in one another, overshare every small detail about our lives and ask for advice without fear of judgment.

Encompassing everything from the fourth grade Sacramento field trip in our log cabins, to the science camp ropes courses in fifth grade, to staying over at each other’s houses every night all summer, the bond our group shares is stronger than ever and shows no signs of weakening.