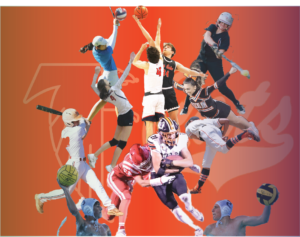 Photo by Beverly Xu
As schools of the same district, Saratoga High and Los Gatos High compete against each other throughout a variety of sports.

Permalink
The Falcon set out to find if the Saratoga High vs Los Gatos High sports rivalry even exists.

It’s no mystery that Saratoga High and Los Gatos High are flip sides of the same coin in the same district — SHS is focused heavily on academics while LGHS is more focused on sports.

The football team once had a fierce rivalry with Los Gatos in the 1960s through 1990s, but in the last 30 years, SHS beat LG only once, in a miraculous 2010 matchup. These days the teams are so unevenly matched that they don’t play anymore. But besides football, looking across numerous fall, winter and spring sports, SHS in fact has its strengths when it comes to the primary sports rivalry.

Bring out the badminton baddies

Leading the pack of competitive teams is badminton. Historically, SHS has played in a higher league than LGHS and senior varsity player Evan Oaklander believes that any change in dominance is unlikely.

“We are not in the same league,” Oaklander said. “They’re in the lower one and [we usually outperform them], so a rivalry doesn’t really exist.”

Oaklander believes that SHS maintains the advantage due to its proximity to badminton clubs that train more competitive players, such as internationally ranked class of ‘22 alumnus Adrian Mar, who — along with several other notable players — represented SHS at CCS.

Despite losing several seniors like Mar to graduation, Oaklander hopes that SHS will be able to stay in their current league and that himself, along with a few other players, will advance to CCS once more.

“I just feel like there’s more interest in badminton in Saratoga, at least in comparison to Los Gatos,” Oaklander said.

Soccer’s cleating the floor with the competition

Last year, the girls’ soccer had one of their most successful seasons, winning the El Camino league and advancing to the semifinals in CCS. This season, they have been moved up to the De Anza league while LGHS got relegated to the El Camino League after a winless season.

The two schools haven’t played each other in a long time, so the current rivalry is not as prominent as it used to be. Nevertheless, SHS is holding its own in the sport.

Boys’ soccer at LGHS has also moved down to the El Camino League where they will play SHS during the season. According to senior captain Dylan Sinton, who plays right back, because the two teams are now playing in the same league, they will have quite an active rivalry this year.

The strong number of talented juniors and seniors on varsity gives the boys’ soccer team a strong shot at winning the league this year, as they kick off their first league game against LG on Dec. 15.

“LG has kind of kicked our butt in the last few years, but I think it’ll be a good game,” Sinton said. “Hopefully we will win, but I think the rivalry will absolutely be real this year.”

Boys’ (and girls’) basketballers be ballin’

SHS hoopsters view the Wildcats as their main hardwood rivals. Last season, the varsity team played Los Gatos three times (once during preseason and twice in league) and won two of three.

“There’s definitely a different atmosphere when it comes to facing them,” said senior captain Niveydh Pai, who plays shooting guard and small forward. “Everyone gets a lot more competitive and we always mark [the date] on our calendar.”

This year, LGHS has a strong squad and Pai is uncertain whether they will be successful playing them, but knows that their game on Jan. 18 will be exciting to watch. Historically, the Los Gatos and Saratoga boys’ basketball teams have gone back and forth and have a closer rivalry than any other sport in SHS.

The girls’ basketball team, on the other hand, has not fared well against the Wildcats in recent years.

“Absolutely not,” senior team captain Tanya Ghai said. “We absolutely do not have a rivalry with LG.”

She said that even though they play Los Gatos twice in league, it is not one of the games to watch out for like Palo Alto or Los Altos.  However, Ghai still thinks this year they have a good chance of performing better against LG in their game on Jan. 17, as the LG’s team’s best player graduated.

The SHS girls’ golf team competed in the SCVAL finals, players sophomore Sarah Lim and freshman Millie Wang made it to the Northern California Golf Championship (NorCal) and Lim went to an out-of-state tournament while Wang qualified to the State Championships after placing fourth at NorCal, where she ended 40th.

LGHS plays in the same league as SHS and managed to compete and placed 13th at CCS as a team. On average, however, their individual players ranked much lower at CCS than SHS’s.

“As a team, this year they did better, but that’s because they dropped a division, whereas we stayed in the same division so it was a harder competition for us as individuals,” Lim said. “[However, Wang] and I definitely do better than individuals in Los Gatos.”

Because the two teams will be playing in the same league next year, an active rivalry is present between the two schools, and SHS’s standings will be further tested in next year’s golf season.

“Our coach (David Gragnola) sees them as our biggest rival just because they’re Los Gatos,” said Lim. “They won their league this year, so for next year they’re gonna be in our league again.”

For track and field, the rivalry between LGHS and SHS is present but described as “friendly competition,” mostly due to the fact that they are in different divisions and LGHS tends to perform better.

Historically, the LGHS running program has been dominant, while SHS has had a few strong individuals such as alumni Harrison Dance and Krishna Murthy.

“At the end of the day, whoever’s faster is faster so there’s no hard feelings or resentment from either side,” senior Elizabeth Stoiber said. “I think both schools use the competition to get better.”

Stoiber is unsure about the upcoming track season in the spring, but knows that some athletes, such as senior Jalyn Harrigan (who runs the 300m hurdles), the 4×400 team (seniors Harrigan, Stoiber, Isha Goswami and Lisa Fung) and senior Mika Tippetts (who throws discus and shot put) has a solid shot at making it to CCS and potentially States.

When they play them during the preseason and in scrimmages, they are already familiar with a lot of players and get to talk to them after games. The LGHS team, which placed second in the De Anza League, while SHS placed fifth in the El Camino League — showing the Wildcats’ strength.

“We don’t play them in our league because they’re a whole lot better than us,” sophomore hole set and right flat Cassidy Coghlan said. “They advanced to states this year.”

For his part, athletics director Rick Ellis believes that, although the rivalry varies greatly between sports, Los Gatos’s sports program is stronger by a narrow margin. He attributes this advantage to the difference in school population — LG has 800 more students and therefore a greater pool of players to choose from.

This reality shows up in team rosters. For example, while Saratoga’s entire football program has 45 athletes, Los Gatos has 40 on just their freshman team; Los Gatos cut 30 girls from their girls’ soccer team, while Saratoga’s team does not even have 30 players and no JV team this year.

“They don’t sweep us, but they definitely edge us out,” Ellis said.