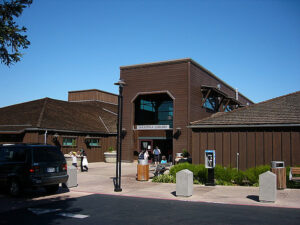 Permalink
One of the best places to visit in Saratoga, the Saratoga Library has left me with many fond memories over the years.

My public library — because yes, it belongs to me and the hundreds of other people who frequent it every month — has shaped me into the person I am today. You may think I’m exaggerating, but my first memories in Saratoga after moving here in second grade seem to have all taken place in the lively children’s section of the Saratoga Library.

Without the library, I never would have heard about Tintin’s adventures with Snowy or how Auggie overcame his struggles in “Wonder.” The Saratoga Library, a modern 48,500 square foot structure, instilled in me a love for reading that will last a lifetime.

My house is a 10-minute walk away, so when I first moved here, I walked to the library with my sister and parents every weekend. I looked forward to those two hours in the library, the time I spent picking out Tintin comics with my dad or Magic Tree House books with my mom.

And as I grew older, my capacity for literature expanded, and I began taking different routes during my library visits. Instead of taking the usual right-turn to enter the children section, I started taking a left into the teen section. I was introduced to the magical world of Harry Potter and the dangerous expeditions featured in the Hunger Games and Maze Runner series. My fascination for books increased — all because of my visits to the library.

It was also at this time that I noticed the other rooms in the library. Some days, after school ended, I would walk with my friends to the library. For the most part, we were responsible and did our homework together, but sometimes we played “Minecraft” or “Super Smash Bros” in the Community Center or at the desks near the window in the adult fiction section.

My experiences at the library have taught me many necessary lessons in life. For example, I learned how to strike conversations with complete strangers — you can meet all kinds of people at the library, and just talking to them can be an eye-opening experience.

For instance, when I was in 5th grade, I met a college student who was looking at a textbook that had to do with advanced calculus. Being one of those kids who wanted to brag about knowing calculus, I asked the man if he could teach me some of the basic concepts in his book. He agreed, and I understood almost nothing, but my interest in math — which still remains today — grew so much just because of that one conversation.

The library is a place where I can go to study for tests, work on projects with my friends and be productive. The countless hours I spent in the various areas of the library have given me memories and friendships that I still cherish today.

In a few years, I’ll go off to college and leave Saratoga. I’ll get a job and probably live elsewhere, maybe even start a family someday. But my experiences at the Saratoga Library, a truly special place, will stay with me for the rest of my life.