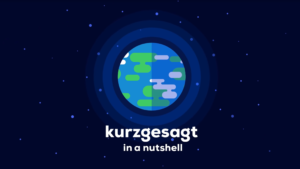 “Kurzgesagt — in a nutshell” is an educational YouTube channel with over 17.7 million subscribers.

Permalink
With thousands of hours poured into creating short, educational videos, this channel stands out for its excellent animation that easily conveys complex topics to the average Joe.

Have you ever wondered what would happen if you dropped a bird in a black hole? No, probably not. But if you have, I present to you the YouTube channel, “Kurzgesagt — in a nutshell,” to satisfy all of your quirky scientific questions.

The channel, often just called Kurzgesagt, is an educational YouTube channel that uses short animated videos to convey complex scientific topics. If you were wondering, Kurzgesagt is pronounced “kurts·guh·zaakt” and means “in a nutshell” in German.

The channel centers around exploring scientific concepts, ranging from the inner-workings of the immune system to the implications of finding alien life.

The channel has recurring characters, all of them birds. One is a black duck with an orange bill named Duck. Duck can be found in various videos and also on Kurzgesagt merch. These birds are somehow given increasingly more gruesome deaths in each subsequent video. They first appear as cute little animals, until they get obliterated by a planetary nuke or sucked into a black hole mere moments later.

What stands out most about Kurzgesagt is its amazing animation and the narrator’s smooth voice. The team behind the channel creates all its animation in painstaking detail through Adobe Illustrator and After Effects, and the narrator’s voice is consistent and pleasant to listen to. Looking through the channel’s history, viewers can find that the channel’s excellent animation extends back to its very first video on evolution, with an arguably questionable scene where two teddy bears have censored intercourse (for purely educational reasons, of course).

Although the channel’s videos are short for the complex content they cover, often glossing over specific details, it provides a perfect mix of visual enjoyment and education. And in a world where it seems hard to trust scientific information online, Kurzgesagt stands out for the hundreds of hours its team spends on researching topics. The creators try their best to be accurate, and when they make mistakes, they always notify viewers.

Watching the channel’s videos has often led me to conduct further research, which often include looking at sources the channel lists in its description.

For example, after one video brought up the 1975 Banqiao Dam failure in China, I dove into independently researching the dam and even had a conversation with my mother about its collapse. Death estimates range from 26,000 to 240,000, statistics that were never published in China. She only learned of the catastrophic failure when she immigrated to the U.S.

A few months ago, I decided that I wanted to support the channel for bringing me entertainment over the years, so I decided to buy their app that shows the scale of objects in the universe from the incredibly small Planck length to the entire observable universe.

I paid $3 for the app, but haven’t even used it once. I try to console myself by saying that I’m contributing to spreading science throughout the world, and that I can’t even buy a school pizza slice with the money I spent on the app.

Thankfully, buying Kurzgesagt merch isn’t necessary to gaining value and entertainment from this channel, and if you learn one thing after reading this article, it’s this: Go watch Kurzgesagt; you won’t regret it.