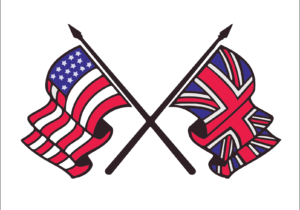 Photo by Amy Pan
Though they speak the same language, the U.S. and U.K. have many cultural and social differences contributing to drastically different living experiences.

Permalink
An American and a Brit discuss the differences between their birth countries.

We have a British lad, fresh off the concrete jungle of London with an accent thick as marmite. There’s also an American, raised in the sheltered bubble of Saratoga on Barney and Flamin’ Hot Cheetos.

The U.S. and the U.K. may be connected through history, but the experiences of growing up in the two are very different. The same language doesn’t always carry the same meaning.

So, we — sophomore Falcon reporters Saachi Jain and Will Norwood — set out to compare (and debate) the cultures of our home countries.

What are some of the speaking and spelling differences between the two countries?

Saachi: The British are obsessed with the letter “u.” They add it to every word — colour, flavour, humour and harbour — and replace the letter “z” with an “s” in their written words: realise, apologise and organise.

Will: The simple reason why American words have dropped the “u” is because of sheer American laziness.

Will: It’s true — when the Webster dictionary was written, Webster purposefully changed words so they would be spelt phonetically, and distinctly different from the British way.

Saachi: Americans also speak much more casually and use slang, conjunctions and words like “bro.”

Will: Don’t forget: We use “bruhv” in everyday language, though it may sound strange to the average American.

What are some cuisines enjoyed by both countries?

Saachi: Cookies in the U.K. are called biscuits, a far cry from the soft, buttery Southern biscuits we enjoy in America.

Will: Not too sure about “enjoy” — they are way too dry.

Saachi: Chips are also called crisps, which is understandable due to their crispy nature. But why would you call french fries chips?

Will: A cookie is only referred to as a “cookie” when talking about chocolate chip cookies. We use the term “french fries” to describe skinny fries and “chips” for any deep fried potato in the shape of a stick.

Saachi: Now that is simply limiting your options. I am much more of a gingerbread person myself. Americans also consume an unhealthy amount of processed food. Take a Twinkie, which is sugar cream inside of a butter-laden “cake.” It’s unnecessary and unhealthy, but we still like them.

Will: A lot of British food is more fresh and less processed than American food, but we still enjoy processed food once in a while. At the local corner shop in the U.K., we tend to have a lot more fresh sandwiches and picnic food. If I went to a convenience store in the U.K., I would get a sandwich; in the U.S, I’d probably buy a bag of Takis and an Arizona Iced Tea and be on my way.

How was your education different?

Saachi: There wasn’t much homework assigned in elementary school: mainly just math worksheets. Teachers gave the class a packet of math homework for each week and we would have to turn it all in on Fridays.

Will: In primary school, we weren’t really assigned homework. We had classwork, and if we didn’t finish it, we would do it at home.

Saachi: Reminds me of sixth grade.

Will: During secondary school, teachers assign homework to students, but it’s not always a graded assignment. Unlike in the U.S., not every single piece of work or homework goes toward your final grade.

What were some after school programs you attended as a kid?

Saachi: My childhood was pretty relaxed. During elementary school, I attended Clubhouse, an after-school program hosted by the school where you can do homework, play with friends and make art projects. My piano teacher picked me up from Clubhouse each Wednesday for a lesson and dropped me off at the Saratoga Library until my parents picked me up in the evening. At home, I read a lot of books, watched TV and learned to cook.

Will: Similar programs to Clubhouse exist in England, but they are more of a place for kids to get dinner and hang out while they wait for their parents to pick them up. During primary school, I had a childminder. Most Americans will have no idea what this is, but they’re simply a person who looks after your child after school, similar to a nanny. My childminder picked me up after school and I would stay at her house until my parents came to pick me up. Whilst I waited, I would read or watch TV.

Saachi: ‘Whilst.’ Oh my. Overall, my childhood wasn’t spent running from math class to math class after school, but more on my own. My parents let me walk home, stay home alone and hang out in the library at a certain age. As I have grown, I realize that this was all to grow my independence, something I am now grateful for experiencing.

Will: I was not granted much independence. I couldn’t wander off on my own or even go to the corner shop that was a 3-minute walk away without my older sister. It’s not that my parents didn’t trust me, but they didn’t want me alone when I was 8 years old. At the time I was mad, but I now realize they were only doing it to protect me. The idea of not allowing kids to walk alone was widely different among parents. One of my friends, living in London, was allowed to take the tube (subway) all by herself to school.

How are pop culture and television different in two English speaking countries:

Saachi: Growing up, I had strange TV show preferences, to say the least. “Caillou,” “Barney” and “Dora” were the highlights of my life from ages 2 to 6. The iconic songs “I Love You” and “Everyone is Special” are still ingrained in my brain. Now, I’m a movie maniac, binging Marvel movies, “Mission Impossible” and other action films for hours on end.

Will: Growing up in the U.K. I watched “In the Night Garden,” “Tracy Beaker,” “Horrible Histories,” “Operation Ouch” and many more. The BBC was responsible for a vast array of TV options for me as a kid. From age 2 to 4, my family’s upstairs television constantly played Cbeebies (BBC but for toddlers), much to my delight. However, nothing beats the British entertainment industry’s originality and continuation of the “James Bond” franchise, so I would say the Great British Isles win in this department.

Saachi: I will always remember what I grew up with and enjoy now in America.

Will: And I can never forget what I fell in love with as a child in the UK.