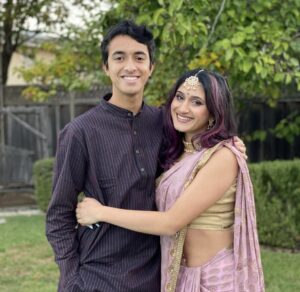 Photo by Mithil Chakraborty
Mithil and Meghna pose together during Diwali celebrations this year.

Looking through childhood videos, Class of 2021 alum Mithil Chakraborty watched his 4-year-old self tense his forehead in concentration, arch his shoulders back and raise his poised fingers to his chest. In the tape, he replicated every Bharatanatyam step his older sister Meghna executed on the wooden dance studio floor, fixated on her grace and rhythm. His passion for dance was born.

“Being six and a half years older than me, Meghna is the person who really got me into performing,” Mithil said. “Ever since then, she’s been one of my biggest supporters.”

Now a first-year bioengineering major at UCLA, Mithil has performing experience in a range of genres from Bollywood to musical theater. He began singing lessons with Gayle Greenbook at the age of 7, and joined the Mona Khan Company at the same time. After entering high school, Mithil was promoted to a company dancer, and performed for paid gigs such as the Golden State Warriors halftime show and a reception for the prime minister of India in 2015 at the SAP Center.

Mithil was also selected through an intensive tryout process to be a performer for IndianRaga, an organization that makes professional music videos blending classical Indian music with less traditional vocals and instrumentals. Under the IndianRaga fellowship program as a high school freshman, he opened for some of India’s biggest Bollywood stars at the Shoreline Amphitheatre, which he recalls to be one of the most surreal moments he’s experienced.

“I got to skip school for a week and wear an earpiece, and it just felt like I was one of those people on TV,” Mithil said. “I saw so many Bollywood stars there, and it was by far the biggest audience I’ve ever performed in front of.”

Because his parents and extended family were never involved in entertainment or performing, Mithil said that he has looked to Meghna for guidance on navigating the industry that can be “brutal at times.”

Meghana, a Class of 2015 alumna, graduated from USC in 2019 with a business major and a digital arts minor. While attending school in Los Angeles, she joined the Joya Kazi Unlimited dance company, where she learned about the production work behind music videos and films.

After working in a marketing internship at Amazon Studios post-graduation, Meghna returned to USC for the two-year Peter Stark Producing Program. Her Amazon internship involved promoting existing content, but Meghna said she applied for the USC graduate program in hopes to one day create things she believes in.

“I’d been interested in storytelling since taking yearbook in high school, but it wasn’t until college that I realized how much I loved being on set and working in entertainment,” she said. “The purpose of this program is to figure out exactly what role I want to be in.”

Through gaining experience in a range of job opportunities, especially in the South Asian community, Meghna realized that she wants to center her career around promoting cultural diversity. At Universal Pictures, Meghna worked on engaging African American audiences through the promotional campaign for “Queen and Slim,” a groundbreaking film in the Black community; she was also featured in a dance number in the popular Netflix original series “Never Have I Ever.”

At first, Meghna said that it was difficult to find role models pursuing non-traditional careers: Her business friends were going into consulting and banking, and her parents had their own reservations about her career choice. However, meeting other South Asians in the entertainment industry gave Meghna assurance that the path she was taking was the right one.

“I used to spend so much time in my head, being anxious, and doubting myself that at one point I was like, ‘OK, I’ve chosen a path. Now I have to stick to it,’” Meghna said. “I realized that the world is so diverse, and if you seek out the community you’re looking for, it’s there.”

Gaining the confidence to carry her passion into her career is a lesson that Meghna conveyed to Mithil, encouraging him to keep performing throughout college. While she was home during the pandemic, the siblings would make TikTok videos and song covers, fueling their passion for performing.

Mithil also wants to closely incorporate music into his bioengineering career, and is currently researching the impact of music therapy on information retention and Alzeimher’s prevention.

“I hate it when people say that once you turn 18 and go to college, all of your passions aren’t important anymore because you have to focus on your studies,” Meghna said. “Being able to connect a passion to a paycheck is so important to me  — it’s all connected.”