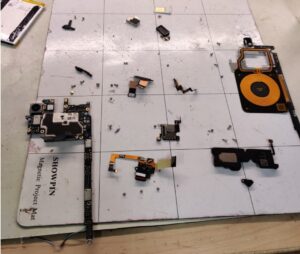 The ring from the primitive work handset pierces the silence in the back of the house. I press the green button twice: once to answer the call and again to put it on speaker. I set the handset down next to my magnetic screw mat and begin to speak: “Thank you for calling uBreakiFix, what can I fix for you today?”

This summer, I worked as a technician at uBreakiFix, a chain of tech repair shops in the Bay Area. I had wanted to work at the shop for a while but never had the time, so as soon as AP tests wrapped up, I scheduled an interview. Not only did the work seem to align perfectly with my interests, but two of my friends also work there.

Luckily, I got the job, and on my first day of work, I walked into the shop excited to start working on phones but nervous about interacting with customers. I was thrown into the thick of it immediately: an 8-hour shift, opening and closing the store with two other technicians.

The first phones I fixed were iPhones. I found that repairing newer iPhones was a straightforward process. For a screen replacement, the two screws at the bottom need to be removed before the screen can be pried up. Unscrewing 1 or 2 metal brackets reveals the flex cables that connect the screen and battery to the motherboard, which can be unplugged like separating two legos.

The new screen can be installed by simply reversing the entire process: Plug flex cables back together, screw in metal bracket, close screen and finally screw in screws at the bottom. After doing a few iPhones, I could fix a screen in just 15 minutes.

For Samsung phones, the process is more complicated. The back glass is stuck to the frame with adhesive. To remove it, the phone has to be heated on the hot plate at 73°C.

My baby hands couldn’t handle the heat, but my coworker grabbed it without any signs of pain. Using a guitar pick, the adhesive can be sliced all around the phone, and the back glass can be peeled up. Then, all the internals have to be transferred to the new screen assembly: the motherboard, charge port, selfie cameras and the loudspeaker.

The idea of working 8-hour shifts seemed brutal at first, but to my surprise, my first day of work flew by. And so did the second. And so did the third. All the while I was making around $15 an hour.

Helping customers at the front desk, however, quickly grew tiring. It was frustrating to have to drop everything that I was doing, holler “we’ll be right there” to the customer waiting and have to talk to them. Occasionally, I’d help the odd customer who was friendly and a pleasure to talk to, but there weren’t enough of those to make working the front desk enjoyable.

Despite this, fixing phones became therapeutic for me; keeping my hands constantly busy really made the time fly.

I kept all of the boxes for the parts I used in a pile next to my work area to keep track of how many phones I fixed each day. Depending on how busy and what kind of repairs I did, I fixed anywhere from four to 12 phones a day. Although, on slower days, I’d be glad for the free time, a part of me would always be dismayed at not being able to topple double digits that day.

Seeing the internals of devices and using them also gave me insight on all the flagship phones in the market. I adore my OnePlus 7 Pro, but I’ve gained an appreciation for the elegance of the Samsung S21 Ultra and the simplicity of the iPhone 12 Pro, and have been made aware of the poor quality control that Google’s Pixel line has.

Plus, it really helped that I had amazing coworkers, mostly older, but all with similar interests.

I liked the job so much that I’m staying on for the school year part time. If you happen to drop by, do me a favor and be one of those customers who’s actually nice.