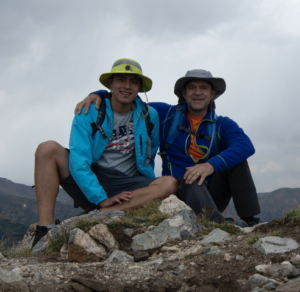 Members of the community recall their experiences and challenges traveling long-distance.

Next to barreling trucks and under blinding street lamps, Class of 2020 alumnus Connor Oaklander found it hard to sleep after he and his father set up a tent next to a highway in Ogallala, Neb. in early August. Desperate to find something to cover his eyes, Oaklander pulled out a pair of clean underwear and put it on his head — he had to improvise to survive on his eight-day camping road trip this past summer.

Since the outbreak of COVID-19, air travel has dropped by 85 percent, and the U.S. is subject to various travel restrictions, a full list of which can be found on the State Department website. But members of the Saratoga community still needed to travel long-distance. To do so safely, they came up with alternative transportation methods and took extra precautions, voluntarily or involuntarily.

On Aug. 1, Oaklander and his father departed from California, with suitcases and camping supplies in the back of their 2007 Toyota Highlander Hybrid. Oaklander’s destination was New York, where he would celebrate his grandfather’s 99th birthday before attending Cornell University as a freshman.

Because of COVID-19, Oaklander and his father did not want to sleep in hotel rooms where they would have to touch shared surfaces, nor did they want to be on an airplane, where passengers might not be wearing masks. So they decided that a camping road trip was the safest way to travel.

This was not uncommon. Surveys show a 64 percent increase in the number of Americans who have taken a road trip this summer, according to Forbes.

“There was always this uncertainty with our trip,” Oaklander said. “But we decided to go with it anyway, just for the experience.”

The trip was also a strategic “quarantine on wheels,” as Oaklander called it. New York state requires a 14-day quarantine for people who have stayed for more than 24 hours in a high-risk state, including California. The Oaklanders found a loophole by making sure to stay less than 24 hours in each of the high-risk states they passed through. This way, after spending eight days on the road, they would only have to quarantine for six additional days upon arrival.

“This trip was nice because it brought us back to the basics,” Oaklander said. “In today’s very busy world, where there’s so much information going around and so much happening, it’s nice to go back to a mood where you are only thinking of what you are doing on that day — how many miles are you going to travel and what are you going to have for breakfast.”

He recalled eating in all kinds of different places, such as next to an active railroad in Pennsylvania, on the shores in Indiana and in the Arches National Park in Utah. In fact, the Oaklanders visited five national parks over the span of their trip.

But their trip wasn’t all sunshine and pancakes. Oaklander was responsible for driving in the afternoons while his father worked remotely. Oaklander found that spending 10 hours a day in a car with someone could make the dynamic between them "challenging.”

He also remembered a night in Des Moines, Iowa, where he tried to cook dinner on a hill and everything slid off the table and began rolling down the slope.

“These experiences are very stressful in the moment, but in the end they make very good stories to share with friends and have a laugh,” he said.

The Oaklanders were careful to prevent any chance of infection. They packed canned food to avoid going to grocery stores, and frequently swam in rivers and lakes so that they would not need to use a public showering facility.

The people they encountered, however, were not always so cautious. Oaklander observed that in some states, people refused to wear masks. He found the belief that walking around without a face covering is an American right is strong in many parts of the country. Studies show that only 47 percent of Americans wear a mask outdoors.

Despite the long trip, Oaklander arrived in New York safely and began his time at Cornell University on Aug. 29.

On Aug. 18, junior Gianna Cagliostro entered the desolated San Jose airport. She and her family were flying to Kansas City, Mo., to see her sister Sarah Baldwind, a SHS Class of 2009 alumna, who was pregnant and soon to give birth.

“I had not seen my sister in a year,” Cagliostro said. “It felt like a trip we had to make despite the pandemic.”

For the safety of Baldwind and her unborn daughter, the Cagliostro family took a multitude of precautions. Before going on the flight, they self-quarantined for a week. Her mother also got tested for COVID-19 and came back negative, which she described as an “extra boost” of confidence for their family. The rest of Cagliostro’s family did not get tested, but she said that one negative result likely meant they were all virus-free, since they were always around each other.

On the airplane, Cagliostro was disappointed to find that the seating arrangements were not spaced out, but the passengers were given ziplock bags with hand sanitizer and cleaning wipes, which they used to wipe down their seats. The cabin crew was also walking up and down the aisles to make sure everyone was wearing a mask, so Cagliostro felt relatively safe.

When Cagliostro stopped for a layover in Phoenix, however, she saw that the airport was more crowded than it was when she flew there last year. Some of the passengers did not wear masks properly, only wearing it over their mouth, around their neck or not at all.

“It was insanely crowded,” Cagliostro said. “People were hanging out really close to each other when they obviously weren't related, and that was suspicious to me.”

Upon arrival in Kansas City, the family put themselves under quarantine, staying in separate rooms to do their own activities. Cagliostro said that they constantly showered, washed their clothes and made sure that everything was sanitary. Baldwin safely gave birth to a daughter on Aug. 20.

“Seeing my niece definitely made the trip all worth it,” Cagliostro said. “After being at home for so long, it was amazing to be on a plane, knowing that I was going somewhere.”

Thirty hours had passed before my father, Lincoln Chen, took off his mask in his hotel room in Xi’an, China. But he had been expecting it to be much longer, for his original flight involved flying from San Francisco to Washington, D.C., then to Brussels, before landing at Xi’an. Merely the day before his flight, he bought a better ticket with only one layover in Toronto. It was not the second ticket he booked, however, but the 11th, with all of the previous ones canceled.

Before the pandemic, there were 335 flights between the U.S. and China every week, he said. In early August, however, there were only four commercial flights per week, according to Reuters. The scarcity made it difficult to get a ticket, let alone to pay the high price.

The hassle was made worse by the constantly changing travel restrictions. At the time of his travel, for instance, Schengen countries allow passengers from the U.S. to transit only once.

My father's work requires him to fly between the U.S. and China frequently, and after being in the U.S. since the beginning of quarantine, he had to return to his office in China despite the obstacles and concerns.

The biggest difficulty, he said, was trying to sleep on the long flight. He wore a N95 mask, which is intended for healthcare workers, according to the CDC, but he felt the need to wear one because he was to be in a closed space for over 12 hours. However, a N95 mask requires the person to make a conscious effort to breathe, so whenever he began to drift off, he would jolt awake due to the lack of oxygen.

“Wearing a mask makes you feel mentally comfortable and secure,” he said. “But physically it was very hard.”

The People’s Republic of China has forbidden international flights from landing in the capital city of Beijing. Passengers were accepted in other cities, where they would be put under a two-week mandatory quarantine in a hotel room.

“You don't have any choice,” he said. “They just assign your hotel room, and you have to pay for it yourself.”

My father was not allowed to venture outside the hotel room door, and all of his food was delivered in boxes. During his two weeks, he worked and did whatever exercises he could in the confined space, such as pushups, high kicks and squats.

Throughout his quarantine, he was subject to three separate COVID-19 diagnostic tests. Two of the tests took swabs from his throat, and one with blood samples. His temperature was also checked twice per day throughout his stay.

“Starting from the landing in China, to when I left the hotel, I didn't witness a single human in normal clothes,” he said. “All of them were wearing protection uniforms.”

The only flexibility was that he could buy items online. He ordered a book, some fruits and a knife to cut the fruits. However, when his package was delivered, the knife was missing.

He checked with the reception to learn that there was a strict no-knife policy. He was told that the government was worried that a person quarantining in the room without permission to go out for two weeks may experience mental health issues. According to Medical News Today, isolation can contribute to conditions such as depression and anxiety.

“A knife can become a dangerous weapon to harm themselves or maybe attempt suicide,” he said. “I think the Chinese government has gotten really experienced doing forced quarantines now.”

Because he was able to talk to his family and friends over the phone, my father felt like two weeks without human contact was not a big issue. On Aug. 3, he left the hotel and returned to Beijing. Due to the difficulty of flying, he currently has no plan of returning to the U.S.

Chen said that international travelers should extensively research the travel restrictions, as these bans are highly specific and unpredictable.

Even though China’s policies are severe, he believes that these precautions have helped to better contain the virus.

“Even with zero new cases in China now, everyone still wears masks on the streets,” he said. “This is the part we can learn from. When we travel, we need to wear a mask all the time and use hand sanitizer after touching anything public.”

Travelers like my father, Cagliostro and Oaklander have overcome several difficulties to travel during the pandemic. The three expressed concerns on how Americans, especially those in some parts of the country, are not taking enough action in preventing coronavirus infections. Despite the challenges, they have ended up with unique stories to remember in an already extraordinary year.

“When our world overcomes this,” Oaklander said, “our generation can tell our children about our experience in 2020.”