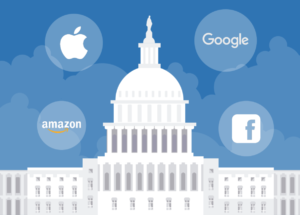 Antitrust probes are probing everywhere. From Alibaba to the Big Four, the tech industry has witnessed unprecedented investigations in the past couple of years. And with the Federal Trade Commission (FTC) on social media giant Facebook’s heels, big tech has never been as scrutinized, and threatened (aside from the dotcom burst), as it is now.

With some of the most popular products and services and $5.6 trillion in value spread among them, it’s safe to say that Amazon, Apple, Facebook and Google stand as the titans of the tech world. It’s no surprise that such companies have begun to endure scrutiny from the public and the U.S. government.

Yet heavily regulating them or breaking them up may be counterproductive. As recent as July, Amazon, Apple, Facebook and Google have undergone congressional hearings investigating whether or not these companies hold monopolies in their respective spheres. Such hearings saw inconclusive multi-hour grillings of Amazon CEO Jeff Bezos, Apple CEO Tim Cook, Facebook CEO Mark Zuckerberg and Google CEO Sundar Pichai.

Despite maintaining extraordinarily high market shares in their respective fields, Apple, Amazon, Facebook and Google should not be subject to antitrust regulation due to the benefit they provide to their respective industries and consumers.

Antitrust laws are a set of legislation intended to regulate businesses, trusts and corporations to suppress monopolies and promote competition for the benefit of consumers. Yet when the effective monopoly is naturally generated (as it often is within ecommerce, social media and internet search), it’s important to evaluate the precarious balance between forcing competition at the expense of user experience or leaving the industry unrestrained at the expense of competition.

In such an era and industry, dominated by algorithms and artificial intelligence, competitive advantage can only be developed with the accumulation of data, thus leading to the potential for the development of effective monopolies.

Though neither Apple, Amazon, Facebook or Google hold exclusive control of their respective industries, the actual issue at hand regarding these companies lies in the question of whether or not they have too much control.

Accusations that Apple holds a harmful monopoly over consumers and startups can be safely disproven; despite being the most valuable company in the world, it retains 13.9 percent of the global smartphone market, a measly number compared to the market shares of Amazon, Facebook and Google. Neither is it among the top two companies that produce smartphones.

Recent antitrust hearings have targeted Apple’s control of its App Store, but the service that it provides is not exclusive to the company. Favoring certain apps over others on the App Store (a product owned independently by Apple, a private company) is not on the grounds of an antitrust lawsuit. This behaviour is not characteristic of a monopoly due to the presence of alternative, and even more popular products. Apple is still far from holding even an effective monopoly that the other three arguably have over both app distribution and the smartphone market.

In order to understand the basis for Congress’ antitrust hearings, it is integral to understand the difference between the effective monopoly and the literal monopoly. For example, though Google has competitors that do hold the company in check should Google implement drastically unfair policies that exploit users, the company possesses such a large control over search (over 80 percent) that it renders competitors, for the most part, practically irrelevant. Facebook and Amazon hold similar advantages, with the companies holding a 60 percent and 49 percent market share, respectively.

In regards to Google, the dispute lies here: Where Congress has criticized that the company’s side-payments and acquisitions have led to this domination over the industry, it is rather the very structure of the industry that Google operates within that generates this “effective monopoly.” In an industry of data and information, competition encourages the inevitable gathering of larger and larger sums of data than others; this is not only good for the industry, but for the people seeking the best searches.

A phenomenon known as the “network effect” explains the rapid development of monopolies within such industries, in which a product becomes more valuable with the more users it accumulates. Consider the telephone, a classic example of the network effect.

The Washington Post points out how if “two people have telephones, they’re a higher-tech version of what children do with two tin cans strung together by string. But if millions of people buy telephones, they become an essential tool.” With each additional user, the product gains value.

In Google’s case, each day brings billions of searches. The data is accumulated and used to help optimize its search engine, thus improving user experience. As more and more users join Google, more data is obtained that allow Google to recommend more relevant information to its users. As a result, it has far surpassed its competitors, and has driven the companies it has acquired and merged with to new heights.

Amazon and Facebook maintain similar advantages that enhance the user experience. Designing a product superior to these companies would require either a technological revolution or an accumulation of data greater than these three companies; the likelihood of either situation occurring is practically ignorable.

To restrain a company such as Google would require the suppression of data collection and government intervention to benefit competitors. The other change that has been proposed involves imposing structural separations and prohibiting dominant platforms from entering adjacent lines of business, meaning companies such as Facebook and Instagram might be separated, and Google would lose control of YouTube.

Yet these acquisitions have often served to help smaller companies. Zappos, YouTube, Instagram are just a few of the companies that improved following their acquisition by bigger companies. The separation of such companies leads to the division of the service or product, leading to such services becoming significantly less useful and accurate for consumers.

Acquiring users is part of developing a competitive advantage in almost any industry, and in an industry where the number of users directly translates to the quality of the service or product, forcing competition and splitting companies seems counterproductive toward benefiting innovation and consumers.