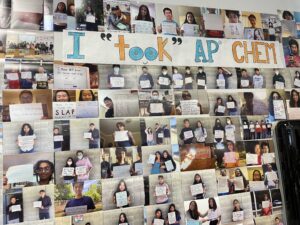 Permalink
Teachers said they decorate for their own pleasure and to create a happier learning environment.

When students walk into chemistry teacher Janny Cahatol’s classroom, they see doodles on the whiteboard, lab equipment scattered around the room and a large periodic table hanging on the wall. The most eye-catching part, however, is the “memory wall,” filled with pictures surrounding a colorful “I ‘took’ AP CHEM” lettering in the middle.

Lower on the wall, where Cahatol places more recent photos, students can find many familiar faces. Within these pictures, past students hold up a whiteboard with chemistry jokes like “Don’t trust atoms, they make up everything” or Cahatol’s well-known phrases such as “Late! Late! Shame on you!”

“The things that students write on their board are either making fun of me or them remembering the fun they had in this class,” Cahatol said. “I want students who are coming into this classroom totally intimidated by the curriculum to know that we’re going to have fun.”

Cahatol takes memory wall pictures for her students at the end of each year — instead of trying to have the most beautifully decorated room, she aims to capture memories for herself, incoming students and past students to look at.

“I enjoy teaching my students a lot and I love it when they come back from college or after graduating to see pictures of themselves as well as their friends,” Cahatol said. “They get so happy, and that makes me remember how much they have grown as a person.”

Another valued part of her classroom is located at the top portion of the left wall, where there are various airplane, ball and spoon shaped objects made out of aluminum foil, representing the time when Cahatol taught Chemistry Honors.

Colorful paintings pack the walls of English teacher Natasha Ritchie’s classroom, lighting up the room along with big windows on the left which are almost perpetually unshaded. Ritchie enjoys showcasing her students’ past work, believing she has some of the most impressive student art decorations at the school.

Most of Ritchie’s decorations come from a creative final project she assigns at the end of the year, for which many students choose to make 2D art.

“I decided to use mostly student art for my own aesthetic pleasure and because I often reference them during the units,” she said. “I can be like, this exact painting was based on the scene.’”

In addition to organizing thematically by text, Ritchie orders the projects chronologically by the historical periods each book or short story represents. Starting from the left of the whiteboard and moving clockwise around the room until the left wall, students can see art revolving around the legacy of slavery and “Beloved,” the 1920s with “The Great Gatsby,” the 1930s with “The Grapes of Wrath,” the post-Japanese internment period with “Wilshire Bus” and the 1960s-70s with “The Things They Carried.”

One of the largest paintings in the room is of Jay Gatsby’s car in “The Great Gatsby.” It was made by alumni Noah Jung in 2014 and also served as one of his portfolio pieces for art school.

“What I enjoy about the car painting and many other pieces is that people will play around with different visual elements,” Ritchie said. “If you look at that piece, you can potentially see a party and fireworks in the background, but you might also see destruction. I really enjoy the ones where the student has played with layering or complexity.”

Another one of Ritchie’s favorite student art pieces is a layered painting by 2014 alumna Florence Wang and one other student inspired by the novel “The Things They Carried.” Through depicting a soldier by layering thin rice paper, the art piece captures the “happening truth” and the “story truth,” a common theme in the book and one explored as part of Ritchie’s class.

“Just the way it was made was really cool,” Ritchie said. “The complexity of the text matches the medium.”

Additionally, Ritchie has received some “thank you” paintings from students. One MAP senior project group gave her a painting of the beach, which is currently in Ritchie’s office, as a gift for mentoring their project which had several scenes at the beach. She also has a piece of art behind her desk composed and given to her by senior Anjali Phalke.

Also visible in one part of the room are senior portraits or prom pictures, which are currently lined around the window of the room’s back office.

Additionally, there is a poster reading “A reader lives a thousand lives before he dies. The man who never reads lives only once” at the front of her desk, and the decorations behind reflect this attitude. Most of the decorations are about fantasy books that she feels transports her mind to a different place.

Ritchie also took out some older projects to make room for ones made as recently as last year, such as senior Carolyn Pyun’s “The Great Gatsby”-themed giant playing cards and senior Gloria Pan’s “Wilshire Bus” inspired paintings.

Her decorations are an essential part of her welcoming classroom ambience, Ritchie said. In addition to celebrating iconic literary works and  the efforts of past students, the artwork makes for colorful walls and a visually engaging environment.

“When my room was unpacked and there was nothing on the walls, it just felt like such a sterile environment — to me, that’s not conducive to learning,” Ritchie said. “I think students can zone out and look at the paintings and still be listening. If you have a lot of things to look at in your environment, it’s stimulating and helps keep engagement.”

Room 303, also known as the J-room, looks drastically different this year compared to previous years since English 9 teacher and Falcon adviser Michael Tyler has not been able to put all of his decorations back up yet. Despite some barren wall space, however, students can still see student-inspired and student-signed movie posters all along the left wall of the room, as well as a 2022 yearbook cover and a sign that says Talisman Dr. on the top right corner of the whiteboard.

“I really like having the yearbooks in the room,” Tyler said. “If I had a little bit more time, I would try to get more of the old yearbook covers and make sure we have every single year covered if possible.”

Though Tyler mostly decorates his room with things that are loosely journalism-related, he also tries including items referencing pop culture and sports such as San Francisco Giants and Golden State Warriors memorabilia. Many of his decorations are posters from the yearbook printing company, souvenirs from events or items he found in thrift stores.

One new addition to the room is an actual Mercury News front page printing plate from Willys Peck, a well-known Saratoga historian who passed away in 2013. It is situated at the front left corner of the room and is easily visible from all seats.

“I got a bunch of old newspaper materials from the Peck family and I thought it was really nice that they donated them to the journalism program,” Tyler said.

In the following months, Tyler plans to put back up the journalism program’s award plaques and a toilet seat decoration from a class of 2006 alumni. In addition, he might bring couches back into the journalism room for the first time since before the pandemic because he believes they make the room feel more like a home.

Despite these plans for re-decorating, he said he will never get the room set up exactly the way it was before summer construction. With the journalism room now being shared with Talisman adviser Meghan Laws, he plans to leave it a little empty so that Laws can put up some of her own yearbook-related decorations. Tyler has also moved some of the journalism room’s decorations to the more barren room 501, where he teaches English 9 MAP.

“The room feels more like a home when you have a few decorations, but it’s not so bad to start over in some ways too,” Tyler said. “I think a lot of teachers used the construction as a chance to do a refresh or reset. It was not a typical year because of the construction, but at the same time, I think [the construction and move back in] went better than anyone expected.”