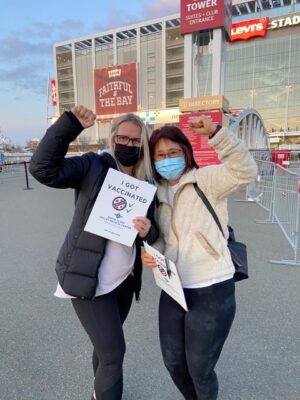 (from left to right) Teachers Kristen Hamilton and Yuko Aoki pose outside of Levi’s Stadium after receiving their first COVID-19 vaccination shot on Wednesday.

On Feb. 28, Santa Clara County educators became eligible to get the COVID-19 vaccination. With the district’s upcoming shift to Phase 3A, which would allow all students a partial return to campus, dozens of  teachers  have received their first shot of the vaccination.

One of them was math teacher Kristen Hamilton, who got her jab at Levi Stadium.

“I was super excited because I can’t believe it’s almost been a year since we’ve been teaching from home, and it’s just time for us to figure it out,” Hamilton said. While there she saw PE teacher Yuko Aoki, math teacher PJ Jim and Spanish teacher Sarah Voorhees.

Since many teachers have not seen each other in person for almost a year, it was exciting to run into them at the vaccination center, Hamilton said. She plans to get her second shot of the Pfizer vaccine on March 24.

The district’s plans to bring students back to campus will all be contingent on the Santa Clara County Public Health Department’s guidelines, according to principal Greg Louie.

The district and District-Teacher Association (DTA) have planned to facilitate a return to campus if a majority of teachers have had the chance to be vaccinated and if the county is in the red tier. As a result, Phase 3B is starting after spring break, when teachers have had the opportunity to receive their vaccinations.

Though the district is unable to provide on-campus vaccinations to teachers and staff, it has taken steps to organize on-campus COVID-19 testing.

LGSUHSD plans on hosting on-campus COVID-19 testing events every two weeks for the spring semester for faculty and staff.

The district hosted the first two testing events on Jan. 27 and Feb. 10 at both Saratoga High and Los Gatos High. Self-administered oral swab tests will continue to be offered at all testing events.

Math teacher Kelly Frangieh, who had previously gotten tested at the Los Gatos Community Hospital, plans to participate in the on-campus self-administered tests. Since November, Frangieh has been teaching a cohort of 9-10 students in her first-period Algebra 1 class with the rest of the class joining over Zoom. Her only on-campus contacts consist of the students in her cohort and a few teachers she sees on campus.

“I will take testing any time it is offered,” Frangieh said. “Now it is offered on campus, so that is great — more convenient.”

Despite the recent developments of on-campus testing and educators’ eligibility for vaccinations, many teachers see the challenges that lie ahead with hybrid education.

“We’ve made the best out of teaching from home for the most part, so I’ve been asking myself, how do we make the best of coming back to school, even if some of us are worried about it?,” Hamilton said. “It’s going to be scary for students to come back. I’m hoping that we get back to school with enough time to see our kids, make progress and learn what this hybrid model is. That way, if we come back next year and we’re still stuck in hybrid, then at least we can start on day one with some experience.”