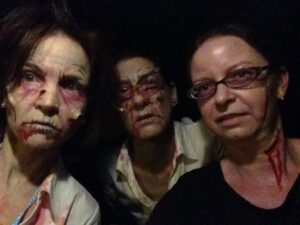 English teachers Amy Keys, Natasha Ritchie and Suzanne Herzman met before school at Key’s house at 5:45 a.m. to put on makeup and dress as Zombies for Halloween in 2014.

In the winter of 2016, English teachers Amy Keys and Suzanne Herzman were heading to their homes in Santa Cruz after school when heavy rainstorms forced them to drive down Highway 101, far past where they had intended to go. Exiting the highway, they stopped at In-n-Out and waited out the rain before turning back to Santa Cruz.

“Being together in storms and traffic is a nice way to cope,” Keys said. “For about seven years [Herzman, English teacher Natasha Ritchie and I] carpooled together almost religiously, every day.”

Through years of carpooling and other social activities, the three have formed a close friendship. The pandemic has hindered their ability to have normal get-togethers like house parties, traveling, camping and carpooling; however, the three have continued to sustain their close bond both digitally through text messaging and through walks and hikes.

Workplace friendships play a crucial role in job satisfaction and productivity. A 2018 survey conducted at Olivet Nazarene University found that 82 percent of respondents had at least one work friend and around 30 percent had a work best friend.

However, a Harvard Gazette survey conducted in May 2020, with 1,271 respondents among 17 industries, found that the pandemic has reduced workers’ social connectedness, as 60 percent of respondents said their social relations became worse. Despite the generally negative trend in workplace relationships, many teachers at the school have maintained their close friendships during the pandemic.

Herzman and Ritchie met in 2004 as colleagues teaching at Scotts Valley High School (SVHS) in Scotts Valley. A few years later in 2007, Herzman met Keys, who was working as a teacher mentor for the New Teacher Project in Santa Cruz County, providing one-on-one support to new teachers completing their credentials. Keys often brought her mentees to observe Herzman, leaving Post-It notes with tips and questions in Herzman’s room.

Ritchie later left SVHS in 2006 to teach at Saratoga and encouraged Herzman to apply when another position opened in 2009. In 2011, Keys left her job as a mentor to return to the classroom and teach at the school, teaming up with Herzman and Ritchie.

Since then, they have become close friends, frequently planning lessons together and discussing a range of topics: books, movies, art, family, school, travel, politics and life.

“[Herzman and Ritchie] are kind, funny and intelligent. I admire their great teaching skill, their caring, their problem solving orientation, their integrity, their judgment and their sense of humor,” Keys said. “I feel so fortunate to teach and plan with them as well as socialize with them. [Our friendship is like] family plus work plus friends — kind of ideal, really.”

During the pandemic, the three have stayed in touch.  They all live close to each other on the west side of Santa Cruz. Herzman and Keys have been running together twice a week early in the morning, abiding by COVID-19 guidelines with masks and social distancing. The runs allow them to share teaching strategies and problem solve, as well as socialize outside of their immediate families.

Keys also talks with Ritchie at least once a day about topics like grading and planning since they both teach the same English 11 Honors curriculum. They also go on walks and socialize by going to the beach together with their families.

The two met in 2004 when the math department invited Patel to the end of year lunch celebration at BJ’s Restaurant & Brewhouse just after she was hired to teach for the following school year. She was seated next to Frangieh, who had been teaching at the school since 2000, and the two began to talk about Frangieh’s pregnancy. Patel said their friendship has grown “leaps and bounds” since that day.

According to an article in the Houston Chronicle, having close work friends improves teamwork, collaboration and employee morale, along with employee productivity and employee retention rates.

“I struggled to fit in with my department and the school,” Patel said. “When Mrs. Frangieh returned from her maternity leave, she was the person who made me feel like I belonged and mattered. To be honest, if she hadn’t come back, I don’t think I would have.”

Patel also said she is grateful to have colleagues who have become friends because her workload has become more manageable, as she is able to bounce ideas off other teachers who understand what she’s going through on a daily basis.

Patel added that her friendship with Frangieh serves as a support system; if she has a problem, she knows the other will have her back.

When Patel was scared to get her COVID-19 vaccine, the two went to get it together at Levi’s Stadium. Frangieh also convinced Patel to have an on-campus cohort for students to come and learn in-person back in November.

“[Patel] understands what I am going through at work. She always has my back and is not afraid to challenge me if I don’t want to do something but to also support me through anything,” Frangieh said. “It’s really nice to have a good friend at work.”