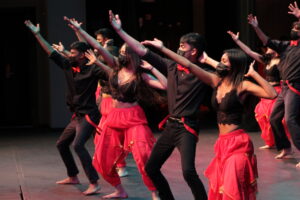 Photo by Atrey Desai
The Tamasha dance team performs at their BnB performance on Feb. 19

On March 24, 16 dancers from Toga Tamasha, a non-school sponsored group that represents SHS at local Bollywood dance competitions, performed at Jalwa, an Indian Bollywood Dance Festival, against 10 to 15 other schools. The festival, hosted at Dublin High, was the first time this year’s Toga Tamasha team performed in person outside of Bombay in the Bay (BnB), as performances for the past two years were either canceled or online due to the pandemic.

“The showcase was one of my favorite experiences performing for Tamasha,” senior co-captain Kavya Narayan said. “Performing outside of BnB this year was a really special experience because it was awesome getting to  connect with our team and other teams”

Established in 2014, Tamasha has been competing at various competitions and schools. The team’s tradition is to recruit the best dancers by selecting from BnB participants. This year, the captains are Narayan, senior Arnav Shah and juniors Ojas Somani and Annika Muju.

Narayan, who has been a part of Tamasha since her sophomore year, started dancing when she was 4.

She said Toga Tamasha has allowed her to branch out and make friends with people outside her usual social circle.

“We bond over our shared heritage and experiences and we also have fun dancing,” Narayan said. “The number one thing Tamasha has taught me is to always be patient — whether it’s teaching choreography, making mixes and learning new dances.”

For Shah, he started dancing in freshman year for BnB and later joined Toga Tamasha in his junior year after his upperclassmen friends recommended it.

According to Shah, the team is very tight-knit, and members always have a great time when performing together, eager for the three upcoming showcases and competitions scheduled later this year.

Next year, junior Anand Agarwal and sophomore Shyla Bhandari will step up to fill Shah and Narayan’s captain positions.

Somani, a current co-captain on the team, garnered attention from the 2019-2020 ICAC officers because of his impressive freshman boys’ choreography and was invited to join Tamasha.

Somani already has plans to improve the team, such as continuing his current efforts to integrate a larger variety of cultures, dances, costumes and props. He hopes that these would allow the team to qualify for prestigious competitions.

Additionally, he plans to add an overarching theme to make his team’s dances more cohesive and easy to follow.

“I’ve become a much better dancer through Tamasha and I’ve even been able to lead much of it,” Somani said. “[Joining the team] has been one of the best decisions I’ve made in my dancing career.”