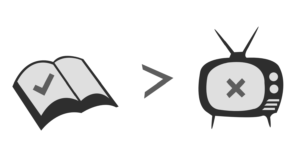 Although the people who know me might get annoyed when they repeatedly hear me say “the book was better” after watching the movie adaptation of a popular book series, my point still stands.

Although I know it gets obnoxious, I still believe I am completely right because there has almost never been a movie adaptation that did the book justice. What I believe is actually obnoxious occurs when people say, “I’ve only watched the movies,” then proceed to lecture me on how amazing Draco Malfoy is.

Anyone who has only watched the Harry Potter movies might believe Draco and Snape deserved redemption, but they are utterly and entirely wrong and should never voice these opinions to any real book-reading Harry Potter fan. The adaptations stripped these characters of all their evil traits that make them who they are.

Books allow you to come to your own conclusions regarding which characters you like or dislike, regardless of the author’s opinion because you are able to see multiple perspectives. This freedom isn’t given to those watching a movie since it is much harder to portray a character’s inner thoughts, and the director’s views on the books will influence their portrayal of characters.

Also, in order to make the plot work in a short time constraint, the movies are always at least slightly different from the books they come from. Those who have only watched the movies are missing the more intricate details that the book provides. Knowing the small things that make the characters tick and their inner thoughts is what makes the books ultimately superior.

For example, in the movies, the Golden Trio of Harry Potter are reduced to one personality trait that is unrelated to them — Harry is not sassy, but instead is completely bland, Hermoine has lost all the qualities that make her relatable and Ron isn’t loyal to a fault, smart or focused on anything other than food because he has been made into a comedic relief character. Getting rid of these self-defining traits completely takes away from the characters, the storyline and the overall story.

But not only for these specific adaptations is there this disconnect between the books and the movie since, no matter how good or accurate the movie is, I believe it’s always better to soley read the book and have it exist entirely in your imagination rather than allow it to be tainted by movie versions that corrupt how you see specific characters.

I believe not reading the books of popular franchises makes a person’s opinion on individual characters or which characters belong together irrelevant; it hinders understanding of the storyline and who the characters truly are, something movies have never and will never be able to capture.