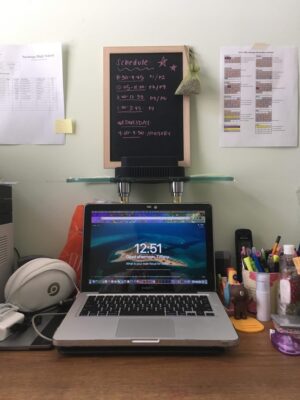 Different avenues are easier to explore through online education.

From an astronomy course at the University of Tokyo to five graphic design courses from the California Institute of the Arts, senior Tiffany Huang spent a good chunk her summer  taking 16 classes from universities all over the globe, many of which are art courses since she plans on applying to college as a design major.

Huang isn’t the only one piling up on summer courses. Many students turned to online summer courses because of shelter in place and the lack of other activities to do.

Huang initially planned on only taking two courses, sound art at School of the Art Institute of Chicago (SAIC) and graphic design at Maryland Institute College of Art (MICA). After both of these courses moved online, she decided to take free courses instead, opting for STEM-related courses such as astronomy and physiology as well as several design-related courses. Most of these courses were self-guided, enabling Huang to work at her own pace without synchronous work or meetings.

“I usually feel down if I do not think I am being productive, she said. “I saw online classes as a sort of way to prove my own academic achievement, since I feel like sometimes people may see my decision to pursue a design major as something that is less impressive, or they might think it's because I am not smart enough to go to a top tier school when that really isn't the case.”

Since Huang is interested in design, she thought taking these classes would expose her to more diverse concepts that she could use in her design work in the future.

After completing a course, students receive a certificate that can then be self-reported on college applications or shown on a resume. Although the workload was demanding, Huang was able to earn certificates in all 16 courses.

“I’d say it was a lot of work because even though it wouldn’t be as intense as something from the West Valley, for example, you have to stick to deadlines,” Huang said. There were actual essays I had to write for my more academic classes and projects that I had to create for my artistic classes that really imitated a real classroom experience in terms of the workload.”

The classes themselves weren’t the only difficult part — Huang tried to get as much done as possible in the span of only one to one and a half months. This involved meticulously planning each day to maximize productivity and viewing lectures at 2x speed to save time.

“Because of COVID-19, I was not able to do a handful of normal activities, like hanging out with friends and traveling, so I decided that taking summer classes was the next best use of my time,” Van said. “The anthropology class taught me so much about social issues that relate to current events, like racial discrimintaion.”

In her art class, Van interpreted art pieces by observing how the colors or strokes demonstrated how the artists felt. Learning how to interpret art pieces has helped Van in other academic subjects like English and history, where art plays an important part.

“I was debating whether or not to take these classes, but I am so glad that I did because I learned so much interesting information that I would not have gotten the chance to learn about at school, ” Van said.

One result of both students’ summer coursework was an expanded view of possible pathways.

“Aside from gaining knowledge, [these classes] were definitely an opportunity for personal development as well, since I learned to be more open-minded about what I wanted to study,” Huang said. “Now I am thinking of double majoring or attending a dual degree program in college to get an academic BA/BS and a design BFA/BA/BS.”