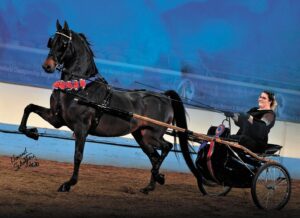 Class of 2020 alumna Ava Boyce-Bender competes in pleasure driving on a horse named Who Dat.

Ava Boyce-Bender, an accomplished saddle seat rider who has won five world championships, graduated from the school last May. In the following months, she moved to San Diego so that she can access a ranch called River Run Farms where her horses are stabled.

Boyce-Bender wakes up at 5 a.m. most days and rides until sunset, after which she returns to her apartment to study to get her real estate license. Such a routine is drastically different from that of the majority of the school’s alumni.

The school has a graduation rate of 99 percent, with a majority of graduates continuing on to a four-year university. But while 97 percent of the Class of 2020 alumni decided to attend community or four-year colleges immediately after graduation, the remaining 3 percent chose to defy the community’s norms to explore other possibilities.

“Saratoga students live in an affluent community where education is important to the majority of the families,” guidance counselor Monique Young said. “But students should not be laser-focused on the top-tier schools.”

Young believes that students should be open-minded because they can be successful in any path they go into, she said. In fact, the U.S. Department of Education finds that within three years, 30 percent of undergraduates had changed their major at least once. Studies also show that 20 to 50 percent of students enter college undeclared.

Young advises students should not be forced to conform to typical paths, but also acknowledges that, in general, having degrees and college units are going to positively affect graduates’ future pay.

Students should exercise caution to find a balance between living a fulfilled life and paying for necessary costs, she said. Some activities are great as a hobby but can be a downfall if made into a career, she said, citing the example of becoming a street artist.

“So if you’re aiming toward a non-traditional route, then you need to think about the pathways to get there,” Young said. “Do you need a degree? What's the likelihood of success? We want to bring reality to you.”

Boyce-Bender started riding at the age of 3 and, as she became competitive in the sport, regularly attended around 10 shows or competitions each year. In her sophomore year, her horses were moved to a ranch in San Diego, launching her into a hectic schedule.

“I was running a crazy life with riding, cheerleading and going to school five days each week,” she said. “Every Friday night after the football game, I would hurry in my cheer uniform to the airport where I jumped on a plane to San Diego.”

Despite seeing her close friends and teachers at school, Boyce-Bender always struggled to focus in class about topics she was not passionate about.

So when considering career paths, her mother encouraged her to find what makes her happy, even if it was not a typical college and career path. Boyce-Bender’s family is already in real-estate business as property managers, and with her love for real-estate and helping people, everything fell into place, she said.

“Riding and studying for a real-estate license was just the natural thing to do,” Boyce-Bender said. “Your career shapes you as a person, so don’t go to a four-year school and get some top-paying job without truly loving it.”

She plans to continue horseback riding and hopes to get her real-estate license in February so that she can start selling houses in San Diego soon after.

Boyce-Bender said that she can always go back to university and get a degree, but it would be harder to get back into horseback riding.

“Why not go out on a limb and try something different from everyone else?” she said.

A gap year for language study

In the summer after his junior year of high school, class of 2020 alumnus Shivam Mani stayed with a host family in Guangzhou, China, for six weeks as a part of the National Security Language Initiative for Youths (NSLI-Y) program. There, he not only improved his Chinese, but also formed long-lasting friendships.

“Towards the end of my six weeks, I felt that I was just getting into the way things worked there,” Mani said. “It’s an amazing experience, and I wondered what it would be like to participate in the program for a longer period of time.”

Because of his summer experience, Mani applied to the NSLI-Y academic year program, in which students study a language abroad for eight months, fully funded by the U.S. government.

At the start of the COVID-19 pandemic, Mani was already considering taking a gap year because he didn’t want to pay full tuition for virtual college. So when he found out that he got the scholarship in April, the decision was easy.

Because of the pandemic, the NSLI-Y program is taking on a virtual format from September to December. Mani is currently taking classes every day with his teacher in Taiwan and classmates in other parts of the U.S.

“Because NSLI-Y is a study-abroad program with the primary aim of learning a language, I’m missing out on an immense amount of experience in this virtual format,” Mani said. “I’m not interacting with the culture and not in the mindset to be immersed in a foreign environment.”

In January, Mani will travel to Taipei, Taiwan, where he will study at Tamkang University. He will be in a dormitory with a Taiwanese student and assigned a host family, with whom he will spend his weekends and holidays.

As for his plans after the year in NSLI-Y, Mani has not decided whether he’d like to attend the Duke campus in North Carolina or the Kunshan campus.

“I think going to a American institution in China is an interesting experience,” Mani said. “I can be getting an American-style education from a great university like Duke, while also having the opportunity to be exposed to the Chinese language and the politics of the region.”

With his interest in history, language and policy, Mani is planning to major in political science and Asian studies. He plans to go into a career in foreign service, international law or international business.

“You’re going to have to deal with China,” he said. “Understanding the Chinese language and the mindset of a Chinese person and the Chinese government is incredibly important.”

Upon her graduation, class of 2020 alumna Berdie Bailey joined AmeriCorps, a service program in which the government funds the volunteers’ food, shelter and living allowance. For one year, she and her fellow volunteers are assigned three stations across the country where they do volunteer work for eight weeks before moving onto the next.

“You never know what you're going to do next,” Bailey said. “The organization would tell us a week or two before the move — it’s literally a surprise. I know that in December we are going to go to Montana to build houses, but nothing beyond that.”

Currently, Bailey is working at a food bank in Santa Rosa, where she distributes food to sometimes as many as 400 families each day, for eight hours every weekday, with weekends off. She enjoys working there because she can connect with people from all paths of life and learn their story, she said.

Bailey decided to join AmeriCorps because she didn’t want to go straight to college after coming out of four years of high school. She said she believes that college can wait because there isn’t a time in life when one becomes too old for college — in fact, 40 percent of college students are 25 or older. Bailey believes that experiences outside of a traditional education can also provide valuable learning opportunities.

“Even though I don’t have a textbook here, it doesn’t mean I’m not learning,” Bailey said. “This experience in AmeriCorps teaches me how to handle a lot of difficult situations I’m struggling in.”

In addition, she has learned about the history and culture of each community she works in, alongside the skills needed for each task, such as learning how to build houses.

However, after this year, Bailey plans to go to nursing school to become a registered nurse so that she can continue helping people.

“I know Saratoga is all about colleges,” she said. “But for people who don’t want to go to college, I say don’t be afraid. It's OK not to go if you really are willing to go out and help people. Just go for it.”