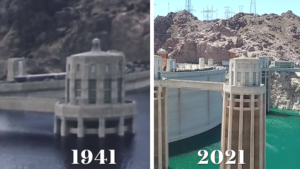 Permalink
Collective drought mitigation efforts from the city, county and federal level shed a positive light to the on-going water crisis in the United States.

On Herriman Avenue just out front of the school, recent renovations echoed a trend that is occurring all over the state: At three houses, dry, brown grass lawns have been replaced with new soil and drought-resistant bushes — landscaping meant to cut down on water usage.

Scientists say the West is experiencing its worst drought in 1,200 years, evidenced best by the low depth of water at the Hoover Dam in Lake Mead. Lake Mead, the largest reservoir in the U.S., supplies 55 to 60 percent of California’s water. However, as of Sept. 25, its water level had dropped 161 feet below the level classified as full. This record-low water level poses risks to around 40 million people in Arizona, California, Wyoming, Colorado, New Mexico, Utah, Nevada and Mexico.

Although visible impacts of the drought aren’t always obvious in Saratoga and other suburban communities, the same privilege does not apply to other impacted and neighboring states (past Supreme Court cases such as Arizona v. California put California water rights above other western states).

Advocates say the crisis calls for city, county, state and federal attention toward re-assessing the collective progress of sustainable development as well as mitigation and adaptation plans for environmental advancements.

These factors collectively increase the severity of drought triggered by climate change. Climate scientists Tim Barnet and David Pierce concluded in their research paper “When will Lake Mead go dry?” that if global climate change prompts a 20 percent reduction of water storage from the total water storage of Lake Mead within 20 years — a current medium global estimate — Lake Mead has a 45 percent chance to go dry by 2045.

Rep. Anna Eshoo, who represents Saratoga and other Bay Area cities in the U.S. House, said that the federal government was forced to implement water usage restrictions as a result of drought — including a recent decision in which President Biden ordered the rationing of Nevada and Arizona water usage.

This plan that Biden carried out followed the federal drought mitigation policy 2007 Drought Contingency Plan (DCP), which authorized reduction of water allocation from Arizona’s Central Arizona Project — a canal that directs water to population centers in Arizona — whenever water levels of Lake Mead dropped below 1,075 feet.

Though California’s water allocation has not been reduced yet, Eshoo said California’s superiority in water appropriation will not last long if the drought exacerbates.

In response to the drought on the state-level, Gov. Gavin Newson extended the drought emergency proclamation — initially created in May — to include Santa Clara County on July 18. This proclamation immediately led to stricter enforcement of water usage rules, prohibiting illegal activities like cleaning hard-surfaced sidewalks with water and irrigating between 10 a.m. and 8 p.m. for more than 15 minutes a day.

Water sources vary across the county. The water supply of the South County of Santa Clara, which includes Morgan Hill, Gilroy, and San Martin, is almost 100 percent from groundwater through the drilling of wells. In Saratoga, however, the city draws much of its water from the Saratoga Creek, which is a surface water tributary that originates from the Santa Cruz Mountains and seeps through Saratoga through natural runoff. The water supply from the Saratoga Creek is supplemented by water from the Santa Clara Valley Water District (SCVWD), which includes groundwater, water from its 10 remote surface reservoirs, and naturally imported water from Sierra Nevada as it flows through hundreds of miles of river into the county’s treatment plants or to the county’s groundwater basin.

In response to the exacerbating drought, Saratoga is solely adhering to the water usages rule from the county-level drought emergency proclamation. Though no additional drought restrictions are imposed on Saratoga by the city council, SCVWD encourages voluntary conservation of water through daily actions like taking shorter showers and advises well owners to create a zone of protection in keeping the water source clean.

Recently, Saratoga took an active and unusual approach in purifying and maximizing the water flow of the Saratoga Creek. The Saratoga Creek Hazard Tree Removal and Restoration Project has directed a large-scale removal of 104 healthy eucalyptus trees around the Creek to cut down excessive uptake of water by these water-dependent plants.

Water shortages increase people’s reliance on groundwater usage, which can harmfully impact water systems and utilities. Through more frequent pumping, pipelines become damaged; another effect is subsidence — the sinking of land — which is occurring in Central California.

“We are really learning that our water infrastructure is outdated,” said Tara Sreekrishnan, member of the Santa Clara Board of Education and staff member of State Senator Dave Cortese’s office. “We’ll see the deterioration of our water quality and supply if conditions get worse in the future.”

To address this growing infrastructure concern, a $1 trillion bipartisan bill was passed by the Senate in August. The House will seek to pass the same bill in early October, Eshoo said. The bill would invest $8.3 billion in drought mitigation in western states, including water storage, recycling, conservation and efficiency projects.

“Our water management policies must address the fact that this drought is not an isolated incident,” Eshoo told The Falcon. “Drought is likely to remain a persistent problem in California and other western states, and we need to make the necessary investments now to conserve water and prepare for future dry years.”

One of the long-term investments Eshoo referred to is education.

According to Sreekrishnan, the Santa Clara Board of Education will make increasing environmental literacy a “top priority” in students’ K-12 curriculum. She said she supports ideas such as establishing a leadership program with youth climate ambassadors, and having fairs and showcases about sustainability-oriented projects. On Oct. 13, State Senator Dave Cortese, representing Santa Clara County in the state government, agreed to work with local youth to direct a major budget in 2022 to Silicon Valley Clean Energy on funding climate education and literacy on the county level.

In addition, many clubs, like the school’s Green Team, have the goal of improving environmental literacy. As the only student-run organization on campus that tackles local sustainability and advocates for environmental changes, Green Team aims to strengthen recycling awareness by working closely with the school’s maintenance department, cafeteria and administration.

As demonstrated by the mitigation plans proposed and implemented on the federal, state and local levels, combating drought requires voluntary and collective action.

“Water is a resource many Americans take for granted, and it’s important for those of us living in states prone to drought to understand that we may need to use less water in the future than we’re accustomed to,” Eshoo said. “I encourage young people to learn more about the impact of climate change on our water supply and how they can reduce their own water usage.”

To directly engage with local water conservation efforts, join Save Our Water Campaign or renovate your lawn to make it less water-dependent 🙂