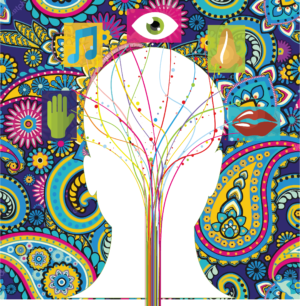 Graphic that accompanied this story in the print issue.

It’s little surprise that sophomore Sydney Hough hears and feels the notes in music she listens to. What is perhaps surprising is that she says she also sees colors when she listens to music.

Though she hasn’t been formally diagnosed, Hough could be a synesthete, or someone with synesthesia, a condition in which stimulation of a cognitive pathway or sense leads to an involuntary experience in another sense. More specifically, Hough has chromesthesia, in which color mixes with sound. She first experienced it when she played piano.

For example, when Hough hears a B note, she sees green, and when she hears D flat, she sees purple. The same notes in different octaves have the same color, but a different shade, like a paler or darker green.

In addition to chromesthesia, there are other types of synesthesia, such as spatial-sequence synesthesia. Synesthetes with this condition perceive numbers, dates, days of the week and months in terms of physical distance. For example, for some, the number 80 feels farther away than the number 70.

Many synesthetes were unaware of their condition until they realized that their experiences are not typical. Others felt like they were keeping a secret. Hough said her experiences have been similar — she didn’t know that synesthesia was an actual condition and didn’t realize she had it until recently.

Synesthesia is not commonly reported due to its personal nature, making it difficult for researchers to measure how common it is. According to Boston University researcher Dr. Veronica Gross, estimates range from one in 100,000 to one in 5,000 people might have this condition.

Although synesthetes usually report experiencing more than one kind of synesthesia, Hough said she has only experienced chromesthesia.

Hough first learned she might have the condition during her piano class when her teacher recognized her aptitude for perfect pitch. Her teacher asked how she was able to distinguish among different notes, to which Hough said she associates certain colors with specific notes. Her teacher then proceeded to describe different keys to her and asked what colors they were. Hough gave consistent answers.

She now takes AP Music Theory at the school, and her condition has proven to be an advantage since it is easier for her to identify pitches.

“Individual notes definitely have their own colors,” Hough said. “Musical phrases also tend to have colors as well or even patterns that come to mind. For example, chromatic scales bring up the image of parallel lines and they’re a general mashup of colors.”

Hough also found that the color of the musical phrase has no correlation with how the phrase is structured and that the oddest combinations of sounds are the most visually interesting.

She also reports that her chromesthesia usually doesn’t get in the way of daily life. She only experiences the colors when she is listening to or playing music, which only becomes a distraction in a social environment.

“Sometimes in social situations, it becomes awkward because all I’m trying to do is hear the music playing in the background, like at a restaurant, and seeing those colors is distracting,” Hough said.

English teacher Amy Keys’ father Bill Keys also had synesthetic experiences. However, his were caused by swelling in his brain due to an expanding aneurysm that was removed in 1980. His first experience in 1974 came while he was teaching English at Madison West High School in Wisconsin, and he felt a strange sensation in his ear.

“I couldn't feel anything physically, but I had my sense of hearing,” he said. “I was waking up from a nap, and the windows were open, and suddenly I could hear traffic from outside and the people moving around the house.”

His experiences began to develop further, and it became confusing for him to speak with others because he had to focus carefully on what they were saying. He eventually went to some doctors who reassured him that his brain was fine.

Particularly, Keys said that the paisley print, a design that has a teardrop shaped motif with a curved upper end and intricate designs of jagged lines and flowers inside and outside, was the one he remembers hearing. He described the sound of paisley print as “very similar to water going down a drain.” Also, when he heard voices and shapes, they would echo.

Typically, the sensations came in intervals, and as the aneurysm swelled, the sensations became more frequent, occurring once every two months then multiple times a month. At the beginning, the sensations occurred for 30 seconds, but they later grew to one or two minutes. The condition lasted for six years, from 1974 to 1980.

“It never affected my balance and I could function, but it was irritating as hell,” Keys said. “I could be in a meeting. I could work in the garden, or school. I didn’t happen when I was driving, interestingly.”

Now, after treatment for his aneurysm, he said he hasn’t heard shapes in years.

“After the surgery, the aneurysm was removed, and I haven’t had a single incident since,” he said. “Now everything is clear.”