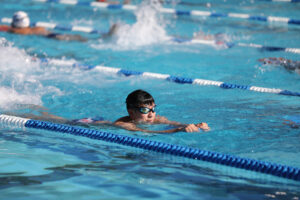 With the season three meets underway, the boys’ swimming team has yet to achieve its first victory. So far, the team has swum against Los Altos, Palo Alto and Homestead, losing each meet. Their meet on April 1 was canceled due to Gunn’s pool being broken.

Despite the losses and overarching lack of participation among former swimmers, the team has made steady improvements.

Just under half of the senior boys opted to not swim this year for various reasons. Seniors Marcus Kuo, Chris Wu, Kian Kwa and Jonathan Li were swimmers who competed in the 2021-2022 season but chose not to swim this year.

“It was really disappointing to see so many water polo kids drop out,” senior Andrew Hong said.

However, the team has seen steady improvement in each meet across many of the boys’ events. Swimmers on the team are continuously hitting personal bests, and senior Ryan Moore recently swam a 500-yard freestyle event in 5:00 minutes, just 2 seconds away from making the CCS cutoff.

Additionally, in many of the 400 freestyle relay and 200 freestyle relay, Singh said that the boys are inching toward qualifying for CCS. However, their performance has been set back due to the logistics of swim meets.

Sophomore Jarret Singh is one of the leading swimmers for the boys. He said that with such a small team, other schools are overwhelming the Falcons with the sheer quantity of swimmers rather than winning events, leading to victories by points.

“Even if they aren’t necessarily fast, they still have a way of getting points by coming in second, fourth, fifth,” Singh said. “Additionally, since we’re a smaller school, there is just less talent.”

Still, the team has made efforts to transition from last season’s lack of unity with a variety of bonding events such as team lunches and dinners. Coupled with in-person meets, the boys are looking forward to finishing out the rest of the season.

“This year, it’s more about having fun, living in the moment, and encouraging and bonding with the underclassmen,” Hong said.