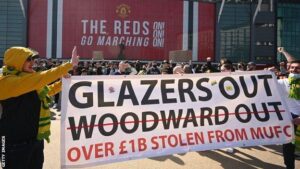 Fans of Manchester United protest club ownership outside the stadium

In a move that ultimately failed, 12 of Europe’s most famous and historically successful soccer clubs announced on April 18 that they would found a European Super League (ESL), a competition that was to take place in the middle of every week alongside their existing domestic competitions. The proposal threatened to crumble the existing structure of European soccer. Its disregard for smaller, less famous clubs enraged their fans and many others worldwide.

The common conclusion to this whole drama was that sports team owners are even greedier than anyone imagined.

Notably missing from the group of founding members were the German Bayern Munich and French Paris Saint-Germain. German clubs have an ownership model known as 50+1, where the fans have a say in the decisions made by the club. This prevented the club from joining the ESL.

Many students, including sophomores Anirudh Iyer and Luke Wang, were among the fans who were against the proposal.

“The reason why I and millions of other fans treasure Champions League ties such as Barcelona vs. Manchester United and Chelsea vs. Real Madrid is because they’re rare events: an almost once-in-a-lifetime game,” Iyer said. “The ESL completely takes away this novelty and I almost don’t feel like watching the game.”

Another important part of the game the ESL would have taken away is the ability for smaller clubs to defeat bigger ones and create compelling underdog storylines.

"It's ridiculous because smaller clubs with good management can still compete with big clubs,” Wang said. “Leicester City, an underdog team, winning the Premier League a few years ago is proof of this. A team’s worth shouldn’t be based on how much money they have.”

Ultimately, the plans were foiled by a couple of factors: the threats made by the soccer governing bodies Union of European Football Associations (UEFA) and Fédération Internationale de Football Association (FIFA). UEFA threatened to ban the participating clubs from all European competitions including the Champions League, considered by many to be the most prestigious in the world. FIFA threatened to ban players of the clubs from playing in any international competition, including the World Cup.

These two factors, along with the severe backlash from fans, pundits and notable figures within the sport, likely convinced the owners of the clubs to back down.

Despite the Super League’s short-term failure, soccer fans remain concerned. The owners of the clubs involved completely ignored much of the history of the teams that local and longtime fans care so much about. For example, Manchester United was formed by railroad workers who wanted a break from their grueling work.

Although the danger of the creation of ESL seems averted for the time being, many are calling for strict punishments to the clubs that attempted to participate. Large groups of fans have protested outside their stadiums to pressure the owners of the respective clubs into selling the club.

The backlash has caused numerous changes in the clubs so far — Ed Woodward, a Manchester United chairman, reportedly stepped down shortly after the ESL debacle, although his reason for resigning is unknown.
Despite its shady origins, the European Super League and its failure may have been a valuable wake-up call for fans. More are now aware of the problems that face their beloved sport, and are inspired to do something about it.