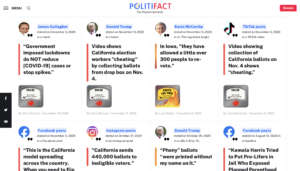 Sophomore Mahati Kotamraju stared at a news headline on her screen: “Amy Coney Barrett is a member of a religious group that was an inspiration for the Handmaid's Tale.” She was taking a fake news quiz, and she was supposed to determine whether the statement was fake or real. She gave the headline serious thought, debating out loud whether it could be true.

Kotamraju said it was true. She was wrong.

Barrett is a member of the Christian religious group People of Praise, which referred to its female members’s advisers as “handmaids” before changing the title to “female leaders.” Despite this coincidence, there is no evidence of a connection between the People of Praise and “The Handmaid’s Tale.”

The original fake story spread in October 2020 through viral TikToks and tabloid magazines and is one of many fake news stories that have gained mainstream attention, highlighting how increasingly common fake news has become.

Factors ranging from hyper-partisanship to increased social media use have contributed to the rise of fake news. According to a Pew Research Center study, most Americans say fake news is a “very big problem in the country today,” more so than major issues like climate change, racism and immigration.

“I see fake news on Twitter daily, so I’m always surrounded by it,” junior Sajiv Shah said. “People often believe what they read without questions, so it’s a pretty big problem.”

Fake news often spreads through social media, which puts younger generations at a greater risk of falling victim to misleading or made-up headlines.

The Falcon created a 10-question quiz about fake news and asked five interviewed students to take the quiz. The first half of the quiz asked students to identify if a given headline was “true” or “false.” The second half asked students to rate different news sources as “reliable” or “unreliable.”

All five students received low results, together averaging a 6/10.

The students were able to accurately identify lesser-known fake headlines, such as whether Vice President Mike Pence supported gay conversion therapy, but were unable to identify widely spread stories, such as whether California’s recent wildfires have been caused in part by forest mismanagement.

The results show what experts say is the most obvious danger of fake news: its potential to influence most people’s opinions and biases.

“I’ve read stories where I’ve definitely made a few major judgments,” Kotamraju said. “The idea that stories like that could be made up and affect my opinions so much — it’s crazy.”

Pew Research Center points out another side-effect of the increase of fake news: distrust toward facts and the media.

The Pew study laid out how fake news affects people’s news habits. While 88 percent of those who “closely follow politics,” fact-check stories, only 68 percent of less politically aware people — the majority of Americans — do. At least 54 percent of people are likely to block off certain opinions and news outlets as a result of fake news, and 31 percent of people have reduced the amount of news they consume overall.

The Pew study claims that behavior like this is harmful because when people read less news, they become less politically aware; less-politically aware people, in turn, are more likely to spread fake news and less likely to read the news. This feedback loop then contributes to an uninformed voter base.

Although freshman Samik Pattanayak said that fake news hasn’t caused him to consume less news, he does fact-check more often.

“I read a decent amount of news, and I don’t think it’s changed because of fake news,” Pattanayak said.  “I do fact-check more often now to make sure it’s actually true.”

The rise of fake news has largely been made possible due to social media, but the Pew study found that there is not one group or person that shares the responsibility for it. Senior Nikhil Nair says that fake news isn’t a new problem, but its effects are increased by an uptick in partisan readers.

“Sensationalism and disinformation in news reporting has been around for a long time,” Nair said. “But the reason these stories actually become fake news is because they are spread by people who agree with their conclusions and don’t put in the effort to verify their claims.”

Conversely, sophomore Allison Tan doesn’t blame ordinary people for fake news. Tan says the rise in fake news is due to one person.

“I associate fake news with President Trump,” Tan said. “He loves to throw that word around.”

Fake news is everywhere and students are especially vulnerable to it and its dangerous effects, but there are methods to identify and avoid it.

FactCheck.org, an organization that fact-checks numerous stories, has multiple ways to identify and avoid fake news, such as checking the source of the news, identifying conflicts of interest and reading stories in full rather than only the headlines, which can often be misleading. Snopes.com and PolitiFact.com post fact-checks for some of the most viral claims and the Associated Press sends a weekly email rounding up the week’s biggest fake news stories.

“I usually consume news with the knowledge of its potential bias,” Alaybeyi said. “If it’s something really important or it has data, then I double check it [on the internet] to see more about it.”

Alaybeyi’s method connects to the fact that stories that are false often don’t get much coverage and won’t be found in reputable sources like the Associated Press and New York Times.

Fake news is most certainly a major problem and while its dangers pose a threat to America’s signature freedom of information, Tan says it’s nothing different from everyday problems.

“If you hear something that a friend tells you, you need to look at how that person was raised,” Tan said. “You shouldn’t take things for face value; you need to do your research. The same goes for the news.”