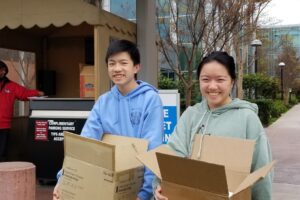 As soon as Harker freshman Eddie Sun, who is the younger brother of class of 2019 alumna Elaine Sun, read about the lack of care for homeless people and the rising severity of the COVID-19, he knew he wanted to make a difference.

“School, extracurriculars and sports had been canceled, and I wanted to help the homeless community by donating packages of hand sanitizer, gloves and face masks,” Eddie said.

With the help of his family, Eddie was able to assemble and donate 300 care packages to CityTeam, a homeless shelter in San Jose.

Meanwhile, as the pandemic worsened, his sister found herself in a sticky situation. Within the span of a week, college after college in the Boston area began shutting down. When Wellesley College gave her five days to move out and Elaine came back to the Bay Area, she wanted to help with her family’s fundraising efforts.

“The news was so jarring,” Elaine said. “Rumors of a California travel ban, the Boston airport shutting down and the cases at SJC made us afraid. I know I'm just one student among millions of others going through the same thing, but when I heard that my family was fundraising to try to flatten the curve I knew I wanted to help.”

On March 16, Elaine and Eddie created a GoFundMe campaign with the intention to donate more packages to the homeless, but as the pandemic worsened, they shifted their focus to helping the doctors on the frontlines. As of April 12, they have raised $385 in medical supplies such as masks, gloves and full-body protective equipment; their goal is to raise at least $5,000.

Elaine has publicized the fundraiser on social media and helped package the supplies, which they donate to local hospitals such as Kaiser Permanente.

“COVID-19 has impacted us all, and Santa Clara County has been impacted especially hard,” Elaine said. “My brother is involved in a lot of extracurriculars, so I know it must have been a difficult switch to a completely online system. I'm proud of him.”

The group decided to start the drive one week into the statewide shelter-in-place announcement on March 17. At the beginning, they feared it was too late to start the drive, but they are looking to join others doing similar public services around and outside the district.

“I felt kind of iffy about whether people would donate, but now that we have a group helping us and the first donation from the community, I am a lot more confident we can make something big out of this,” Lu said. “I want to have a large enough influence to be able to donate supplies and help others outside the Bay Area, such as in New York. They have it the worst there, and they could really use our help.”

The team decided to set up an online fundraiser and a PayPal account; the received money will be split to both buy materials overseas and sent directly to hospitals. Those interested in helping can either donate directly on their website or email saratogacovid19donationdrive@gmail.com.

As of April 12, the team has donated over 10,000 various supplies to locations such as Wesley Manor Senior House, The Children's Hospital in New York, Sutter Health, Santa Clara Valley Hospital and Villa Hermosa Apartments. Though they plan to donate masks, soap, hand sanitizer, sanitizing wipes, thermostats, latex gloves and money, their focus is currently on masks.

As the coronavirus pandemic continues to worsen, both children and adults around the CA-18 district have teamed up under the Neighborhood Pandemic Preparedness Team (NPPT), a grassroots team established by Saratoga City Council Member Rishi Kumar. Although the program is predominantly made up of people here, the NPPT is open to anyone across the nation.

Volunteers such as sophomore Dhruv Singh and senior Sathvik Kaliyur contact high-risk seniors and neighbors in need of essentials; the adult team then buys and delivers them in return for a check. Those unable to drive and drop-off necessities such as food and medication can make masks at home for various medical professionals. As of April 12, over 1,000 masks have been donated to the hospitals and practices of these professionals.

“NPPT believes in direct action because we feel like that is what is needed to uplift the community,” Kaliyur said. “People should not be afraid, and they should know that we all need to work to help each other so we can get out of this together.”

This mindset is also expressed in Saratoga’s MAP fundraiser for Direct Relief. After MAP teacher Mike Davey thought of the idea, senior head of activities and community outreach Natalie Tarbox decided to execute the project.

Since its start on April 2, the program has raised $1,900; Tarbox is anticipating more donations over the next few weeks.

Despite her senior year coming to an unexpected and disappointing end, Tarbox and other members of  MAP wanted to give back to the community.

“It seems like the least I could do to help during a time when everyone feels pretty helpless,” Tarbox said. “Although my senior year may be over and that’s incredibly disappointing, I have to keep in mind that there are people out there who are much worse off because of this virus. I saw an opportunity to help and took it.”

Tarbox and the rest of the MAP leadership team are proud of how quickly efforts have spread throughout the community. Though this started off as just a MAP fundraiser, she has found people not affiliated with MAP donating, which Tarbox said is “lovely to see.”

“It’s hard to remember that there is a whole world out there when all we see is our own bubble within our homes nowadays,” Tarbox said. “But this fundraiser has reminded people to look beyond our own community and help those who need it most.”

Although quarantine may have restricted action and involvement, many have found a meaningful purpose giving back to their community during dire times and stress the idea that it’s not too late to make a difference.

“With everything moving so fast and situations constantly changing, our short term goals change accordingly, so instead, we set a long-term goal,” Eddie said. “If you want to do something good for your community, start with something small, and it can pile up and improve the community as a whole.”