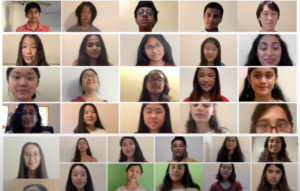 The Wildfire Relief Concert, which took place on Sept. 26 on the Toga Strings YouTube Channel, was hosted and organized by junior Nikhil Kapasi and senior Riya Jain. The concert accumulated almost 300 views as of Oct 20 and raised more than $250.

The idea originally came up in a leadership meeting with a group of students in the music department in an effort to support the teachers who were affected by the fires in late September. The concert was supervised by the music teachers Jason Shiuan and Sean Clark but was largely student-run.

The 50-minute long concert featured 12 performances, including pieces of classical music, musical theater, jazz and pop. Because there was no way to donate directly to the teachers, all proceeds from the concert were donated to the Community Foundation of Santa Cruz, which is an organization near the residence of most teachers.

To plan for the event, the organizing team sent out an email to all the students in the music department to scout for performers. The planning stages of the concert took longer than expected because the team had trouble finding performers and had to accommodate those who needed more time to finish recording.

Another challenge was to find a platform to process donations.

“All the platforms we looked at took a percentage of the donations or took a lot of time to release the funds, so we had to give up tracking how much was donated precisely,” said Kapasi.

Instead, the team decided to ask donors to donate directly to the Community Foundation of Santa Cruz and notify them of their donations through email.

In addition, the event required the combined groups of the choir, band and orchestra teams to work together on a very short timeline, collecting submissions, editing and advertising within a couple of weeks. These tasks were distributed among band, orchestra and choir leadership, but a  lot of the work was done by the participants themselves, who edited their own performances before submitting. The leadership teams then combined the recordings together into one final video.

To keep the audience engaged, the video had to be timed perfectly because it had to be short enough to keep people interested. The organizers aimed at having the concert shorter than the 3-hour concert Tri-M club did for Campaign Zero in June, and eventually ended up with a 50-minute video — only 10 minutes short of their one-hour goal, Jain said.

Despite the work required, the organizers were happy they did it.

“We wanted to make sure we held this concert while the wildfire relief efforts were still going strong so that our contribution could be directly used,” said Jain.

A total of around 100 people attended the livestream. According to Jain, the concert also received positive feedback from teachers, students, administrators and alumni.

“The best thing I took away from this concert was really how incredible the members of the music department are,” Jain said. “It is really humbling to see how incredibly supportive and united this whole department is.”