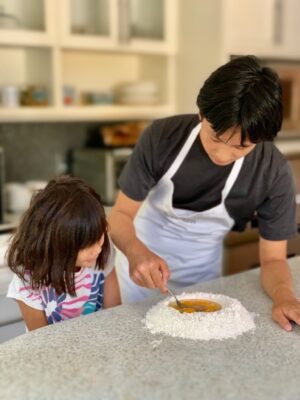 Photo by Minh Do
Sophomore Minh Do bakes with his younger sister in the midst of quarantine.

Permalink
Many students returned to school this year with interests discovered and developed throughout quarantine.

A few months into quarantine, sophomore Minh Do began baking crepe cakes as a hobby. The process of tweaking the measurements for the ingredients was something that made Do relaxed and happy during the period of isolation. In October 2020, Do even created a crepe cake company called Mille Couche, and since then, he has sold around 50 cakes.

With the return of in-person school, however, he no longer has the free time he had during the pandemic, forcing him to close the business.

Do is one of many students who were able to find or rediscover a passion over quarantine and is struggling to keep that interest going as an in-person school and other demands take away their formerly abundant free time. Other students have found ways to keep their pandemic passions going.

When school re-opened this year, Do realized his education and extracurricular commitments would have to take priority, leaving no time to further explore baking.

During the beginning of lockdown, Do gained a massive amount of free time to bake, prompting him to create Mille Couche to sell his crepe cakes. Do said that the extra time due to quarantine helped him refine his recipe so he felt comfortable selling the cakes, as they were complicated and took a lot of time to perfect.

“Eventually, I found a recipe that worked. I spent months perfecting it and over time started my business because I felt like I finally had a product that I was satisfied with.” Do said.

After formulating his crepe cake recipe, Do worked to smooth out all aspects of his business, including an eco-friendly delivery service using his parents’ electric car. He also donated half of his profits to Second Harvest Food Bank.

“Over holidays I got lots of orders, and it was pretty fun,” Do said. “A lot of family members will order, they’ll tell friends and more friends and it’s kind of a big loop. It was pretty difficult in the beginning, but things eventually started to pick up.”

With the increased workload of school, it was still frustrating for him to lose such an important part of his life. “I was really disappointed,” Do said of his return to in-person school. “During online school, it was much easier for me to run these things because I didn’t have to travel to and from school. But now, I have to dedicate all my time to school, and my hobby really comes last. I guess it’s just the tough reality of being a student.”

A passion for art found again

For sophomore Maia Shama, quarantine meant the chance to rediscover her love for art.

Shama grew up drawing and, over many years, became a proficient art student. However, creating art for the majority of her life led her to feel like her value was determined by how people responded to her work.

Shama said she was labeled the “art kid” at a young age, but creating art felt stressful. By the time the pandemic began, Shama said that art became more of a burden than something enjoyable.

“Before quarantine, I made art mostly just because it felt like the right thing to do,” Shama said. “So I felt like, even if I wasn’t as passionate about art anymore, I would still just create it just to fulfill some sort of role I expected myself to fill. [When the pandemic started], I sort of realized that the stuff I was creating didn’t have any passion behind it because I had no more incentive to do it without an audience.”

Shama previously taught at the art studio where she took lessons, Hongyun Art. After beginning to teach, she quickly realized that a leadership position meant more responsibilities and stress, and the job quickly became taxing. Although she enjoyed working with children, she said she felt herself losing her passion to make art, but didn’t know how to vocalize how she was feeling.

“I felt like I couldn’t let myself or other people down,” Shama said. “It was certainly very stressful.”

Shama added that after feeling unmotivated toward creating art for a few years, the isolation of quarantine initially made things even worse. As the pandemic prolonged, however, Shama began to realize that the lack of outside feedback on her art had decreased her stress considerably.

Shama explained that her feelings about her own art used to be almost entirely dependent on what others thought, and she lacked the motivation to create new art when she felt like she wasn’t performing well enough. Quarantine provided her an opportunity to start making art again without the weight of other people’s expectations.

As in-person school returned, Shama’s changed approach to art led her to explore new mediums like photography and sculpture, which she said have re-ignited her passion.

These days, Shama doesn’t plan on returning to her previous art studio or pressuring herself to finish pieces, but she is enthusiastic about making new types of art again. She recently began experimenting with cyanotype, a photographic printing process that creates a cyan blueprint and has also joined the photography club on campus.

Shama found that putting pressure on herself to create art has created a stressful environment in the past, so has decided to make art when she feels motivated to do so. Recently, Shama has made a few cyanotype pieces and has started practicing drawing again. While she hasn’t finished any pieces, she’s spent a lot more time sketching than she had in the past and has incorporated it into her daily routine.

“I think just being around more people, life has become more vitalizing,” Shama said. “Observing the way people interact with me and each other kind of inspired me to want to create and put that into art. Being back in the world breathed new life into my art.”