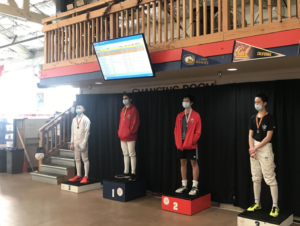 Permalink
Although not as popular, SHS students find passion and patience in fencing.

The score was 14-14; the next to stab would determine the winner. Since it was a match that would contribute to her qualification for the Summer Nationals world championship in July, alumna Helen Yin had to win and she knew what she had to do: calm down, concentrate and carefully plan out her movements to avoid being stabbed while going for the win.

After a fierce sequence of advances and attacks, Yin got the final stab as she lunged toward her opponent. She had made it to nationals.

“I focused on spotting weaknesses and was confident I could get the next touch on my opponent,” Yin said. “Winning a close bout against a good opponent always feels rewarding.”

After quitting competitive gymnastics due to hardships with the sport and a negative experience with her coach, Yin began fencing at age 12 when her friend introduced her to the sport. The agility and critical thinking skills required of fencing piqued her interest. Since then, she has continuously practiced to improve her techniques.

She first learned how to fence at the California Fencing Academy, then transferred to the Massialas Foundation in San Francisco after two years. Ever since the COVID-19 pandemic, she has been practicing at Silicon Valley Fencing Center since its much closer to home.

Over the years, Yin discovered she inadvertently improved various aspects of her life through fencing.

“Fencing has generally helped me with problem-solving skills since strategizing bouts requires critical thinking and a decent reaction time,” Yin said. “It has also helped me with staying in shape and improving my posture, amongst other benefits.”

Many agree with Yin — according to Northwest Fencing Center, fencing is an intense workout and is especially helpful in exercising the lower body, as fencers are constantly in the “on-guard” crouched position. This level of workout requires a high level of discipline, patience and concentration.

Yin plans on continuing to fence in college through Arizona State University’s recreational fencing club as well as a professional fencing program 36 minutes away from her college.

Despite difficulties that challenge her endurance, physical and mental abilities, Yin feels that fencing can be mentally enriching, thrilling and rewarding. It is not about being the fastest or strongest; it’s about being able to think and make decisions on the spot.

“Every fencer has a different set of strengths and styles,” Yin said. “You have to figure out their strengths to prevent them from doing things they’re good at and their weaknesses so you can score.”

Much like Yin, junior Nathan Zhang also began fencing at age 12 because he enjoyed the sport’s fast-paced nature. Zhang has tried many different sports both recreationally and competitively before fencing, but none captivated him as much as fencing.

“It looked really fun and exciting,” Zhang said. “I like that fencing is a hard sport to improve at and I wanted to challenge myself.”

Although Zhang believes he has improved a lot in the past few years, he feels his current progress is stagnating, which is one of the greatest challenges he’s faced. In order to improve and gain more experience, he hopes to continue practicing and working with coaches at the Academy of Fencing Masters and learn by watching professional matches.

One way he has continued to gain more experience is by continuing to attend competitions around the United States. After placing second at the Junior Olympic Qualifier in November, he travelled to Columbus, Ohio to participate in the Winter Warlock RYC tournament in which he gained more experience by watching and playing against skilled players.

Through practice and participation in multiple tournaments, Zhang says he hopes to perform better in the upcoming tournaments and qualify for a national event.

Even though Zhang has not thought much about his fencing career in college, he hopes to improve and demonstrate his skills in fencing in order to prepare himself for potential offers or participation in fencing clubs during college.

Additionally, Zhang said fencing has helped him both physically and mentally: His mile time decreased 30 seconds to 6:40 and his workouts have helped him destress throughout the year.

“It helps me with my mental health as it puts me in a high-pressure situation which requires me to think calmly,” Zhang said. “I can apply this to my daily life and avoid all the stress for a couple of minutes.”

Both fencers said the sport requires diligence and patience. Although it takes years to master, the hard work pays off.

“Fencing is a highly artistic and creative sport and I enjoy the split-second decisions I need to make in every bout,” Yin said. “I find this very thrilling and exciting, which is why I want to continue to improve.”