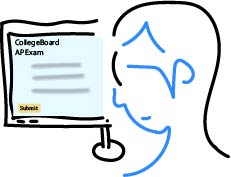 As he began to upload his responses with five minutes left in his AP Computer Science A exam, which started at 1 a.m. on May 15, junior Omkar Kulkarni watched as his Chrome browser froze. Frantically, he abandoned his first choice of submission — copy and paste — and hastily screenshotted his response typed on a Google Doc, hoping the picture would upload successfully.

With only a minute left, his screen unfroze, and he was able to upload his responses. As the word “Congratulations” appeared on the screen, he sighed in relief.

Kulkarni is one among 3 million students who took part in the newly created AP system this year as all the College Board switched AP testing online due to the ongoing COVID-19 crisis.

Students were emailed an E-ticket to log on to their exams, where they submitted handwritten or typed responses to one or two free-response questions. Each test lasted 50 minutes.

Technological issues seemed to be the biggest obstacle. Some students found image submission the most unstable option among the others because of specific format requirements, while others dealt with inconsistent home Wi-Fi or an outdated Chrome Browser.

Kulkarni’s Chrome browser crashed when he was submitting his last AP US History question’s response.  He requested a retake immediately after the incident by filling out a makeup form sent to his email.

Despite such problems, the College Board said more than 99 percent of the students successfully submitted their responses. Even so, students could request a retake if they encountered technological difficulties during the tests. Students with valid reasons will be allowed to take the makeup exams scheduled between June 1 and June 5.

Students outside of the United States felt that the schedule on AP testing puts them at a major disadvantage. The College Board scheduled all the exams to happen at the exact same time around the world, so some students living overseas have to take them early in the morning or late at night.

Junior Audrey Tang left Saratoga for Taiwan in April, meaning she had to take her AP exams at 2 a.m.

“When I made the decision to go to Taiwan, I already knew that I had to take my AP tests at 2 a.m. and that was just a compromise I had to make, but hearing that my friends in international schools also had to wake up at 2 a.m. kind of pissed me off,” Tang said. “The College Board is pretty inflexible and inconsiderate toward their international students.”

To cope with the schedule, Tang changed her sleeping and eating routine to match with the Pacific Time, but it brought “an obvious” impact to her health since she was eating too few meals every day.

“They should've just let us take it according to time zones. I know it's supposed to ‘prevent cheating’ but there were different sets of tests anyways,” Tang said.

Despite these issues, some students say that the changes to AP testing this year provided many unexpected advantages.

Sophomore Joshua Fang, who took the AP Computer Science A exam, felt that the questions were easier than previous year’s. In addition, students typically wrote code by hand on the APCS test in prior years. But this year, Fang said that typing out responses aided in the process because the program he coded in pointed out mistakes he made.

Students also found a new collection of resources to help them study for the tests. The College Board created a YouTube channel called Advanced Placement, which reviews the major concepts and units and provides two mock tests for every AP course.

“I am self-studying AP Psychology this year, and I watched every single video that the College Board put up for that exam,” sophomore Peixuan He said “The teachers explained the topics really well and it is definitely a treat for self-studying AP test takers.”

Fang realized after taking the AP Chemistry exam that the two mock tests that the channel offered are “basically the same as the real test questions.”

All students interviewed said they feel that this year’s AP exams did not accurately reflect the difficulty of the actual curriculum with the open-notes policy, and that having only one or two free-response questions limits students’ opportunities to get a score they deserve.

“For AP Physics, there are only two questions and each is followed by many small questions,” Kulkarni said. “If you don’t know the concept for one big question, it will be really unfortunate.”

Despite the flaws in designing the exam, Fang appreciated the efforts that the College Board put into minimizing the impacts of COVID-19 on students’ academic progress and making sure people around the world still have equal access to the exams and resources.

“Every bit of information, emails and videos the College Board published for preparing students for the APs shows their thoughtfulness,” said Fang. “They even linked a survey on the last page. After all, this year’s online exams are worth remembering.”