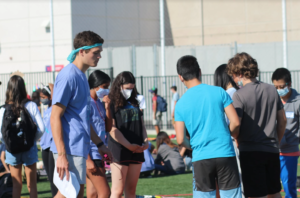 Photo by Isabel Lee
Students engage in games at the Back to School Social on August 13.

Freshman Aneri Shah scoured the science building for her biology class on the first day of school. She frantically compared passing room numbers with the campus map set as her lock screen —  a tip she had learned from an upperclassman.

Although she was anxious to get to class, Shah reveled in the energy among the crowd of bustling students — a feeling she hadn’t experienced since 7th grade.

“It’s so surreal,” Shah said. “Sometimes, I have to pinch myself to remind myself I’m actually on campus.”

After a year and a half of remote learning, many underclassmen have struggled to readjust to in-person school and are now experiencing the typical confusion — and excitement — of finding classrooms and forming in-person relationships with teachers and peers.

Because Shah came from Rolling Hills Middle School in Campbell, she found it difficult to find a friend group, as social circles are typically formed in Redwood Middle School. She noted that the Back to School Social helped her break out of her shell.

“I haven’t really started to make a friend group yet,” Shah said. “I’ve mostly been focused on surviving the beginning couple of weeks, but as time goes on, I’ll try just walking up to new people.”

While Shah had originally expected each grade to form their own bubble, she was surprised by the diversity of students with different cultural and academic backgrounds all interacting through shared activities.

“I think [the community] is amazing, colorful and diverse,” Shah said. “It’s definitely not how the Disney Channel portrays it, with cliques separated by jocks, nerds and cheerleaders. Everyone’s just one giant group.”

Shah also missed the lively elements of in-person school: walking to classes and having teachers to prevent her from dozing off — something she said “wasn’t feasible” last year over Zoom.

Freshman Urvi Iyer has also enjoyed the return to in-person learning, specifically the convenient access to teachers through tutorial periods, as last year in remote learning, only her math teacher offered office hours. She’d often have to contact teachers via email for any questions, which was inconvenient because they “wouldn’t respond for a while.”

Another in-person school plus, Iyer said, is the readily available breadth of extracurriculars. During club rush, Iyer joined the Females for Finance club, and is considering joining Girls Who Code and Art Club.

Additionally, she enjoys being involved with high school athletics. Iyer has played basketball since 4th grade, starting with intramural basketball at her elementary school, then middle school NJB and AAU. She now looks to “play for real” on the SHS team this winter, and is excited for the season to start.

In the meantime, she currently plays goalie on the JV water polo team. Though she has no prior experience with the sport, she said practices and games have been fun, especially with their first 10-1 win against Santa Teresa on Aug. 31.

“It’s really exciting to be in-person and experience everything instead of just sitting behind a computer screen,” Iyer said.

Sophomore eases back into the difficulties of in-person school

For sophomore Kayla Jung, virtual learning offered more leeway for scheduling her day, allowing her to wake up later and work at her own pace. Jung said last year was the only year in which she was truly happy, as she felt more aware of herself without the influence of others around her.

“Usually, you act the way people around you act,” Jung said. “Socially, online school felt like kimchi being fermented off to the side rather than vegetables interacting in a saucepan together. You develop on your own this way and become more independent.”

Jung thinks some sophomores are having identity crises from the year they lost.

“We’re not freshmen, but we’re not sophomores either,” Jung said. “Mentally, as a sophomore, I should know the campus a little. But when a freshman asks, ‘Do you know where this thing is?’ I’m like, ‘I don’t know either.’”

For Jung, in-person communication has been challenging because she didn’t talk much with other students over quarantine. Despite her introversion, Jung has tried stepping out of her comfort zone by joining the girls’ cross country team.

“I adapt to things relatively easily, so I don’t think the identity crisis is too much to be worried about,” Jung said. “We just need to give ourselves time to get used to it.”

For junior Apoorva Talwalkar, the year lost to distance learning elicited a mix of reactions. Currently, she feels like in-person school is an “alternate reality” completely different from her freshman year experience.

She said she also feels like she missed out on significant high school experiences. To make up for lost time, she is actively joining more school activities, such as Homecoming quad day groups.

“I never got the sophomore year I was expecting and I’ll never be able to go back in time and get that back,” Talwalkar said. “So for the first time, I’m participating in hoco deco and, in general, trying to have more school spirit so I can make the most of the time I have left at Saratoga.”

While Talwalkar has enjoyed being face-to-face with others on campus, the increased workload of junior year coupled with the loss of Wellness Wednesdays has posed challenges in staying on top of all her work.

Although she still goes to sleep at around 11:30 p.m. each night, Talwalkar has found herself having to wake up around 5 a.m. — 3 hours earlier than during online school — to complete homework she was too burned out to do the night before.

To cope with the stress of the heavier workload, Talwalkar has been hanging out and studying with friends, as they always make her laugh and take her mind off the pressure for a bit.

Senior optimistic for the year

Having spent junior year over Zoom, senior Weilin Sun said the online environment alleviated a lot of the stress associated with the grades, since teachers weren’t assigning as much work.

As a result, Sun said the senior body has become “more optimistic” than senior classes of previous years. However, he also observed a greater level of immaturity among himself and others in the Class of 2022.

“I feel immature, like I didn’t die junior year,” Sun said. “Sometimes I see juniors at Safeway and they’re supposed to be struggling, but they still act like freshmen. I don’t get how they still have energy.”

In terms of school social events, Sun said he attended “pretty much all the dances possible” when he was an underclassman, so he doesn’t feel like he missed out on much his  junior year.

Regardless, he said he’s excited for the year.

“I’m happy to be back to a full time in-person schedule because it’s my senior year, and I don’t want to miss out,” Sun said. “I’m looking forward to the senior year event and having fun this year.”