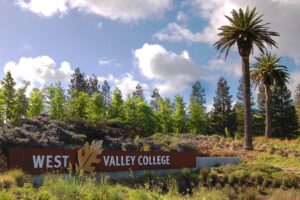 Junior Joshua Fang logged onto his psychology class at West Valley College and quickly found himself in the midst of a philosophical discussion about the relationship between empirical data and evidence and logical a priori thoughts.

Fang, who is enrolled in the Middle College program at West Valley College, said he enjoys being able to build his own schedule, allowing for more flexibility compared to Saratoga High’s more rigid class structure.

“We often also have different professors to choose from, so I can choose the one who best fits my style of learning,”  Fang said.

Despite the social and academic challenges many students have faced during the pandemic, the incentive to attend Middle College remains largely the same: a chance to explore a diverse list of courses and get an early taste of the college experience.

Fang originally chose to take Middle College because of the lack of high school classes that interested him.

“Middle College seems to offer everything that Saratoga High has academically, but more,” Fang said. His schedule this semester includes psychology, philosophy and physics mechanics, along with required courses U.S. History and English 11.

Fang said the most difficult part of attending Middle College is learning self-control and taking the initiative to get the help he needs. Since Middle College instructors don’t monitor their students to stay on top of their work or give the same number of exams or quizzes, Fang realized that it is easier to stop paying attention and fall behind than it is in high school.

Fang takes five West Valley Middle College classes per week consisting of both synchronous and asynchronous sessions; however, he has found that remote learning during the pandemic has worsened the experience.

“I really hoped to study in the same room with college professors and other adults, especially for in class discussions,” Fang said. “Many of my classes, especially those in the winter and summer, which are optional, have turned completely into pre-recorded video lectures followed by quizzes and tests. Also, many labs have just turned into us watching the professor do experiments on video, which is quite disappointing.”

Social connections are also more difficult to create during the pandemic. However, Fang said taking Middle College during the pandemic has not compromised his relationships with peers: he also participates in clubs such as Model UN and Aspiring to Create English at SHS, a choice that has allowed him to keep in touch with his high school friends.

From an academic standpoint, Fang has enjoyed Middle College courses more than the ones he took at SHS, especially competitive ones like honors and Advanced Placement courses. He said that at the high school level, classes tend to be more goal oriented, utilitarian and focused on preparing to score high on the AP test. Without an AP test as a goal, college professors at Middle College have more liberty in designing their curriculum and the topics they cover.

Sophomores Morgan Pott and Anjali Pai, who both plan to take Middle College next year, say they are looking forward to the change from a traditional high school setting to a college environment.

Pott’s main objective is to earn her associate degree in order to complete some of the education needed if she applies to a four-year college. While she anticipates that the courses and scheduling may be stressful, she believes the atmosphere will bring newfound excitement.

“I hope to start appreciating learning more,” Pott said. “High school can be very stressful and grades seem to determine success or failure. Going into Middle College, my goal is to discover subjects that will make me passionate about my future.“

Along with the variety of courses offered at Middle College, Pai mainly wanted to enroll in the program to get a head start on college credits that will allow her to graduate from a four-year university earlier.

However, the advantages of earning credits earlier come with certain drawbacks, as most subjects are taught in half the time regular high school courses take; the information taught in two semesters at SHS is taught in only one semester at West Valley. While Pai is looking forward to taking two additional math classes, she is also concerned about the quick pace of the courses

Because most students choose the traditional route of taking courses at the high school rather than attending Middle College, Pai is also nervous about the social aspect of next year. She anticipates that forming friendships will be tough, as she doesn’t know anyone else who will be in the Middle College program.

“I need to make friends, which will be challenging since it has been announced that the fall semester will be online,” Pai said. “I don’t expect it to be easy to meet new people over Zoom as I am already a quiet and shy person. I will also miss my friends at school, and it's sad that I won’t get to see them every day.”

Still, she is ready for her new path.

“Although I’m going to miss being a regular student at SHS, I’m super excited for the opportunity to have this unique experience at Middle College where I can meet new people and make more connections,” Pai said.