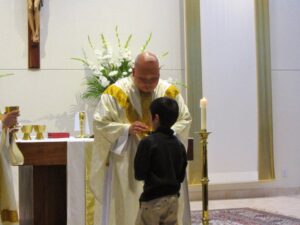 Photo by Tony Fernandes
Junior Tony Fernandes, then a third grader, clenches a goblet with the priest for communion, a traditional Christian rite.

Permalink
Juniors Tony Fernandes and Rohit Sriram describe their dwindling relationship with Christianity and Hinduism respectively, detailing how religion is losing its significance in a progressively more digital and accepting era.

The following interviews have been lightly edited by The Falcon for clarity and brevity.

Juniors Tony Fernandes and Rohit Sriram detail their current relationship with religion, how it has dwindled over time, and their opinions on the fate of religion as humanity progresses.

Fernandes grew up with significant Christian influence but now identifies as agnostic. As a child, Fernandes said he would participate in the church only to satisfy the requests of his paternal grandparents, giving him a blurred perspective on his religious stance.

Sriram had grown up in a devoutly Hindu household primarily through the influence of his family. While Sriram has had a heavy Hindu influence, he has established very early on that he does not feel any connection with religion as a concept and participates only to satisfy familial obligations regarding religion.

Q: How were you introduced to your religion?

Fernandes: Christianity was introduced to me through family interests. I was taught very basic lessons like “Love thy neighbor,” to be grateful and kind to others and to not hurt someone even if they hurt me. However, it never had a significant impact on my life, since my parents had never emphasized it as profoundly Christian concepts, so I don’t want to associate basic morals like those with Christianity. While I think such ideals are not outdated, a lot of what’s said in the Bible certainly is.

Sriram: I grew up in a Hindu environment, mainly from my parents. They never pushed it onto me, but we definitely visited the temple often. In Hinduism there aren’t as many religious obligations, like reading a sacred text, so I have a really loose connection with it. Religion as a concept is not extremely incentivizing and I don’t feel like I gain much when in religious spaces.

Q: What relationship do members of your family maintain with religion?

Fernandes: My dad is currently agnostic. He grew up in an Indian state called Goa, which was colonized by the Portuguese in the 15th century, so Christianity had a huge prominence there, especially on his parents. Since his parents were incredibly religious, he was forced to read the Bible cover to cover but felt a moral misalignment with the book. After emigrating in 1994, he decided to become agnostic. The reason why he’s not atheist is because we can’t really prove that God doesn’t exist. Who started the Big Bang? Who was before that? We don’t really know. Until we actually prove something we can’t just outright say there is no God. My mom had never established a serious relationship with Christianity as a child, so we’re all agnostic as of now.

Sriram: My parents are pretty Hindu and religion definitely has an impact in their daily lives. My grandparents had always been extremely Hindu, which I attribute to a lack of exposure to science or technology that could have contradicted religion. When my grandparents are not visiting, my parents only make me do anything religious before an important event. When my grandparents are visiting, I’m required to wake up very early, shower and recite a prayer called the “Gayatri Mantra” 36 times before starting my day. How my parents and atmosphere influence me has always been on and off, but it has always played an impactful role in the course of our family.

Q: Do you think that religion without a sacred text is a code name for morals, so you don’t need a religion to lead a good life?

Fernandes: I think that religion as a concept can be beneficial, because it’s good to have a streamlined ethics system that you can refer back to if you’re lost and [because] it’s so easy to find a home in a religious community. Religion can be beneficial, but I also don’t think it’s necessary at all, because you can just find your own morals and abide by that instead.

Sriram: In Hinduism, there isn’t an overarching sacred text like the Bible or Quran to lean back on when I had questions, so I had to interpret its concepts in my own way. Since nothing is explicitly defined, I felt that whatever it was saying was inherently moral, so religion just felt like putting a label on my moral basis. Because of that, I don’t feel like I need a religion to lead a good life since religion boils down to morality.

Q: Do you think religion has caused more harm than good over human history?

Fernandes: Over human history, I think it has caused more harm than good, since it has been used to discriminate against race and gender as well. I do think that if it weren’t for religion, there would be another thing that we would just create to somehow divide us. I think religion was intended for individual improvement, but was abused to create hierarchies of power, and has enabled immoral concepts like misogyny and slavery.

Sriram: I think religion has created both, but its harm is far more tangible and problematic than its good. While I think religion as a concept has been used to help give some people hope or a reason to keep going, it has been used to terrorize and dehumanize many more people. To me, it comes down to a matter of how it’s used. If it isn’t abused to validate certain harmful ideologies, I think it can be beneficial to give people a purpose, but it sadly is definitely not the case in practice.

Q: What’s your current relationship with religion or irreligion now? How come?

Fernandes: I don’t use agnosticism to fuel anything in my life, since I don’t consider agnosticism as its own religion of sorts. I just consider myself irreligious. I’ve constructed my own moral code and abide by that instead of pinning it to a religion. For me, I think that’s the best way to go, since having morals is a simple concept and shouldn’t be complicated any further than it is. End of story.

Sriram: I don’t resonate with the concept of God or a higher being, so at the moment, I consider myself an atheist. I think this largely has to stem from the vastly more diverse climate that I have grown up in compared to my parents and grandparents. I have a lot of exposure to different ideas and religions, so I can formulate my own opinions over topics, rather than my parents, who were told to grow up in a certain religious lifestyle. As a whole, I think religion is losing its grip on coming generations due to how easy it is to make an educated opinion on things. For me, I think atheism is a good place to stay religiously and I don’t see myself becoming religious in the future.